In Go Never Return (Bildnis einer Trinkerin, 1979), the first film of the Berlin trilogy by German filmmaker, artist and photographer Ulrike Ottinger (b. 1942), Tabea Blumenschein plays the role of a mute woman who dresses up extravagantly every day simply in order to drink to the point of collapse. This fascinating headlong rush through the most banal and random places of the west German capital takes the form of a constant derive or “drift”, whose precise destination seems to offer little reward with regards to the rate of consumption of alcoholic beverages. The protagonist’s path, as she sits wide-eyed in the back of a taxi, or walks clumsily on her high heels, appears to be one of absolute freedom. Her manner of letting loose is biting, complete, and in perfect contempt of the social standards, as a redundant trio takes the responsibility of reminding us throughout the film.

Ulrike Ottinger places her last film Paris Caligrammes (2019) in this long literary and artistic tradition (Walter Benjamin is never far away). Remarkably sequenced, the winding narration mixes periods and places: Paris today and yesterday, Paris plural and singular. In its autobiographical nature, the story is first and foremost that of artistic encounters and cultural discoveries made by its author in the city of lights. From her arrival in Paris in 1962 at the age of just 20 years old, to her return to West Germany in 1969, Ulrike Ottinger lived seven founding years, that would deeply inform her practice. The doorway to memories opens at the rue du Dragon, in the 6th arrondissement, at the doorstep of the Calligrammes bookshop.

The path woven of images, archives and contemporary shots of Paris sometimes appears to take on the postcard allure of the Saint-Germain-des-Prés life: the bustle of cafés and clubs, the constant flow of visitors into the Cinémathèque française at Chaillot, which sets off Ottinger’s interest in cinema, the classes taught by Bourdieu, Lévi-Strauss and Althusser at the Sorbonne, the empty rooms of the Gustave Moreau Museum and the Louvre’s treasures. Yet ambivalence reigns, in the image of this time of contradictions. After World War II, optimism and progress seem to have no limits. The technical innovations revolutionize domestic interiors and the limits of the known world. Consumption is encouraged by happy, colorful ads. Yet, the world is agitated by conflicts linked to de-colonization. The Evian Agreements ending the Algerian War are signed the year of Ottinger’s arrival in France. She sees in the remains of the Garden of Tropical Agriculture’s pavilions, at an auction at the Hôtel Drouot or in the hair salons of the Faubourg Saint-Denis so many accounts of French colonial history. Between conservatism and libertarian aspirations, this decade leads to the political strife of May 1968: Ulrike Ottinger leaves Paris just a few months later.

From artist to filmmaker, and back again

Arriving in Paris as a young artist (she studied painting at the Munich Academy of Fine Arts), Ulrike Ottinger leaves the academy as a future filmmaker. She first passes through printmaking, with the aquatints of symbolic imagery of the Israël series that she creates in the studio of Johnny Friedlaender and shows at Fritz Picard’s bookshop, leading to her first rave reviews. She then adopts a pictorial practice, employing the colored language of narrative figuration, the French equivalent of American pop art. She makes paintings on different panels that, once assembled, resemble the classical form of an altarpiece. Their narration sometimes resembles the organization of comic strips, beginning with her dreamlike 1966 painting Bande dessinée (“Comic Strip”). The empty word bubbles are a recurring theme in her work, like in the 1967 screen print series Journée d’un GI (“A Day in the Life of a GI”), where the squares alternate between different moments in the daily life of an American soldier, or in her large-scale painting in the form of a puzzle, Allen Ginsberg (1965), in which the Beat poet is dressed up as Uncle Sam.

After a complete film career honored by many awards, for the last decade Ulrike Ottinger has been returning to the artworks of her youth. Drawing on the long flânerie of Paris Caligrammes, which navigates through different registers of images, between reminiscence of the past and visions of the present, the artist has initiated a dialogue with her own pictorial creations, which she interprets on textile supports. The works are presented here for their French premiere. 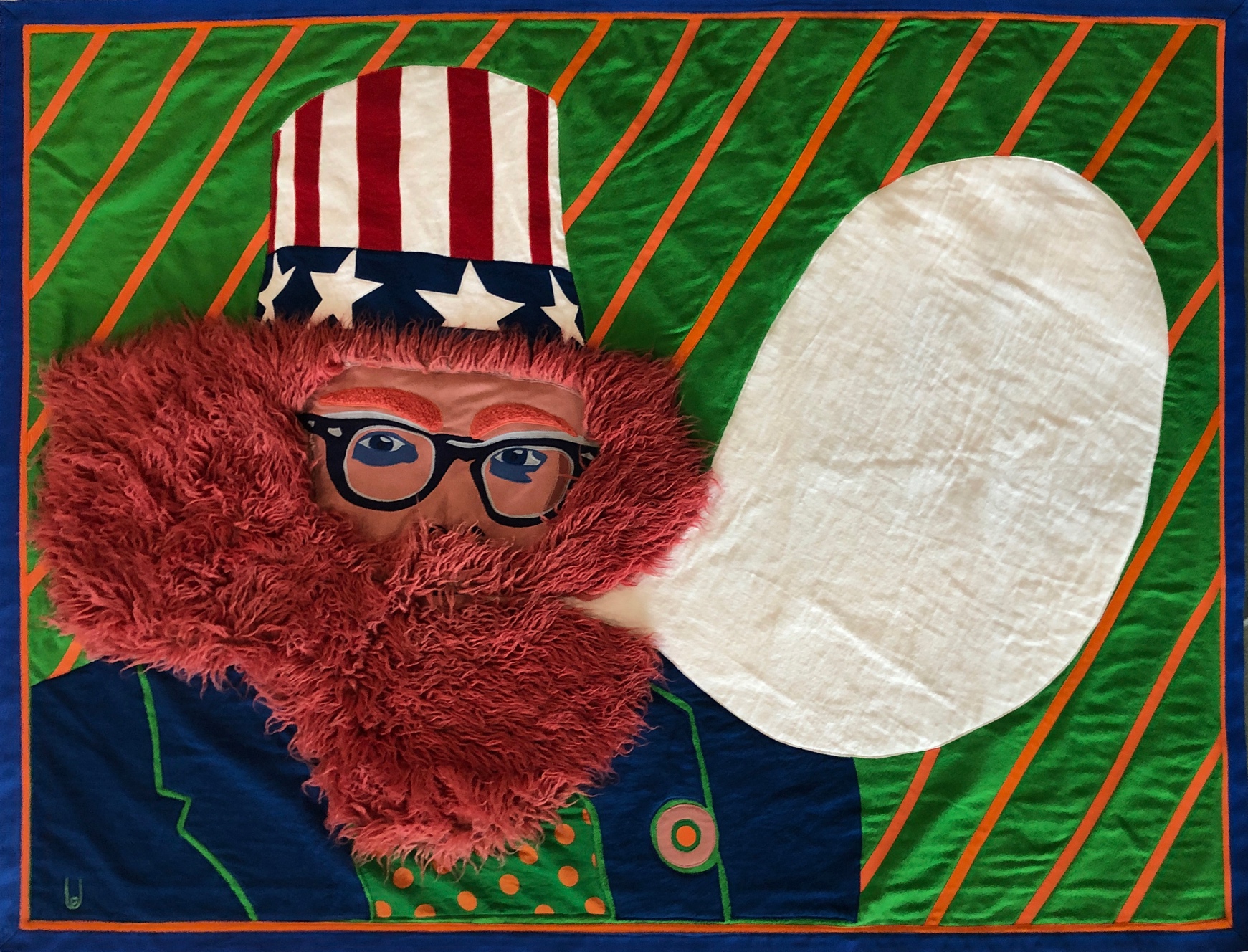 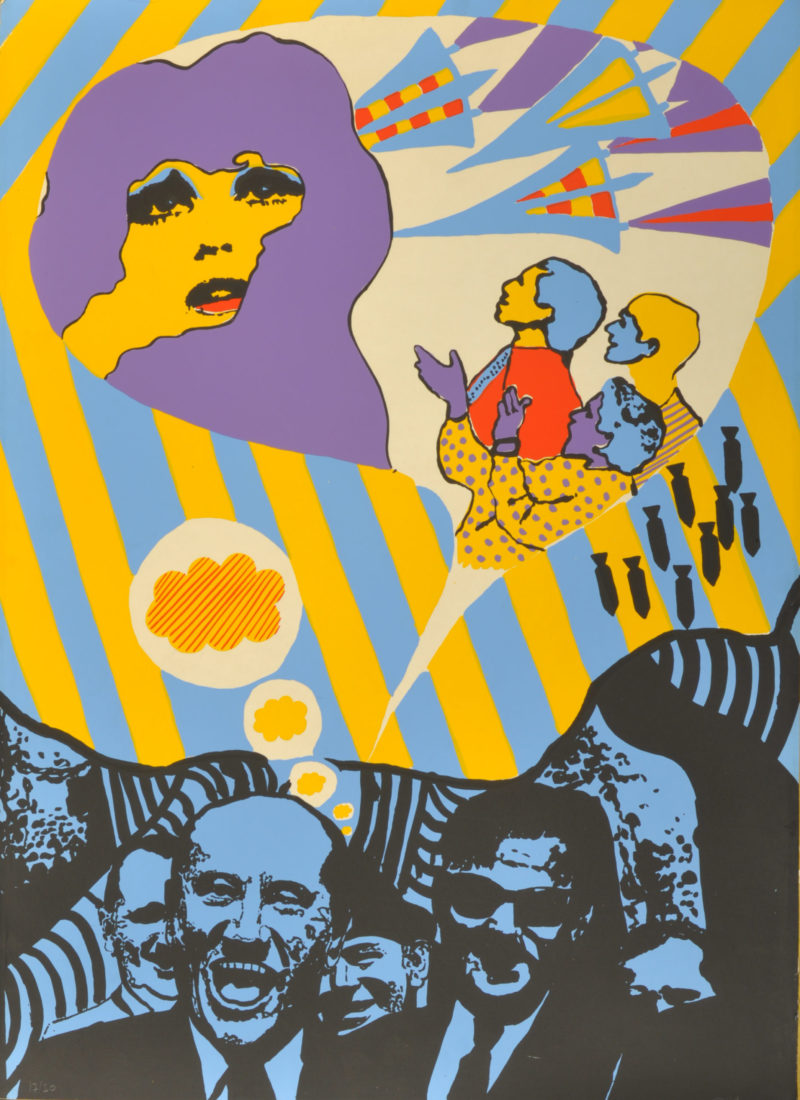 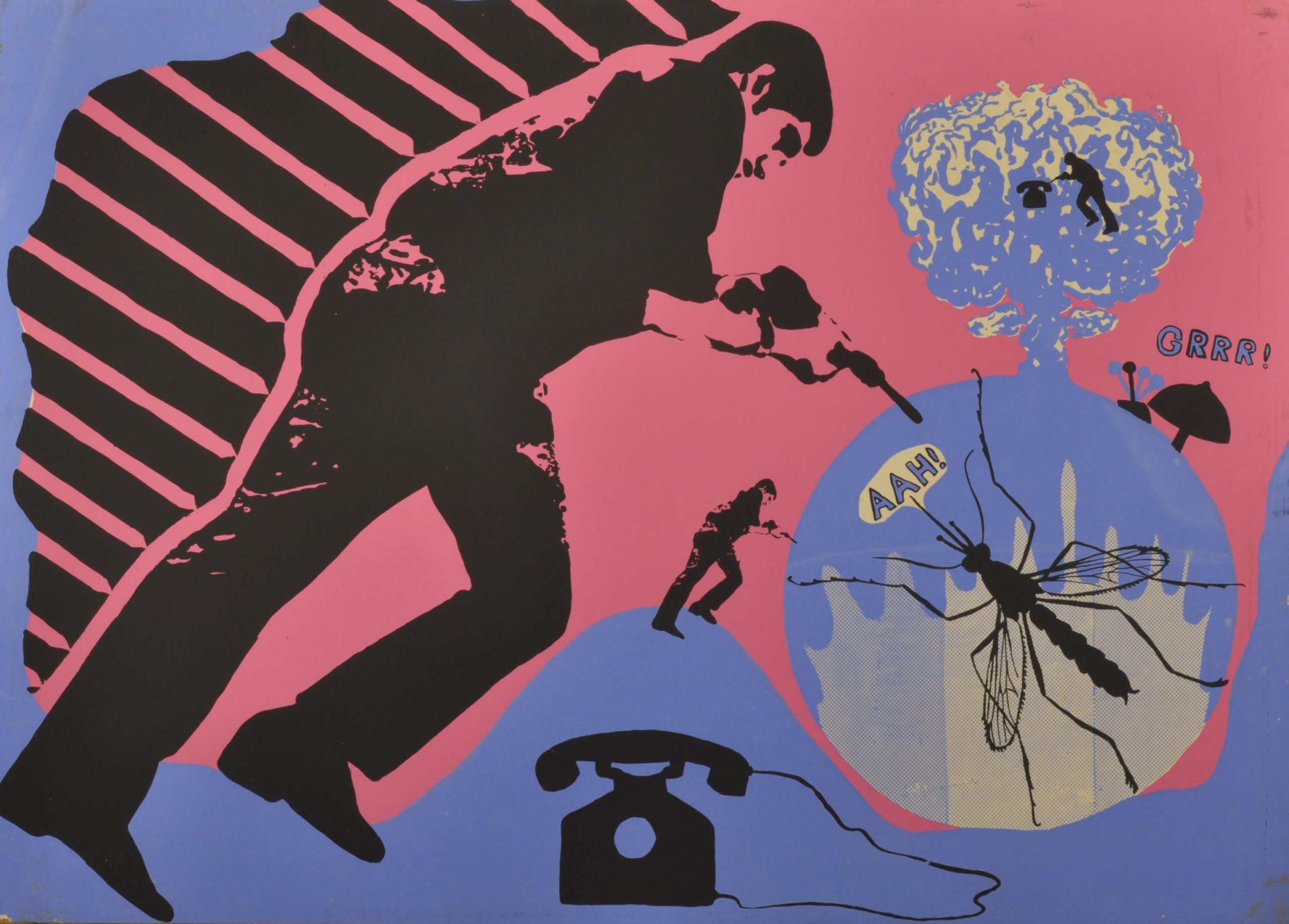 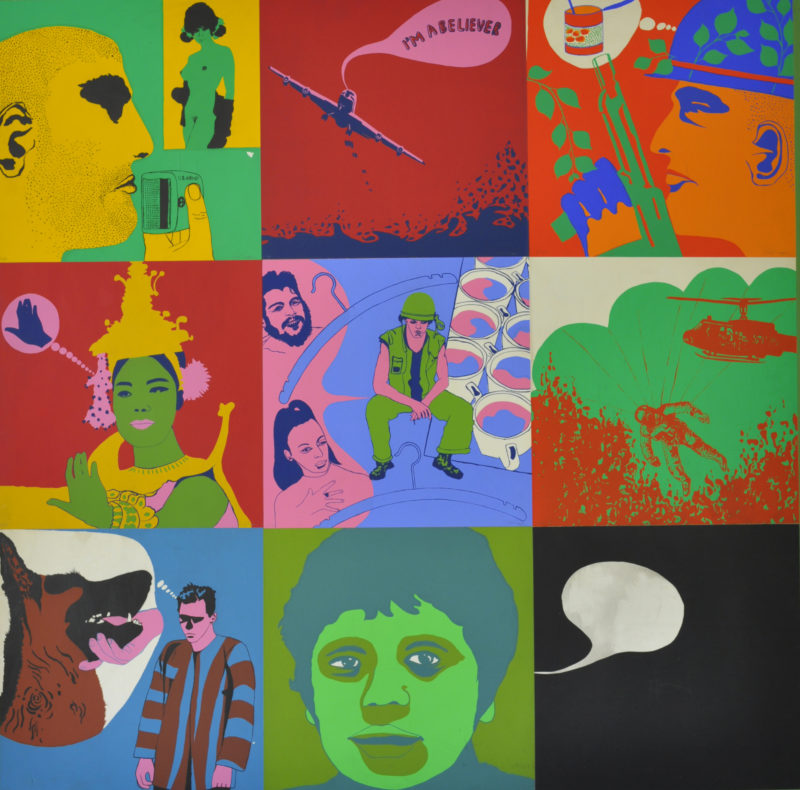 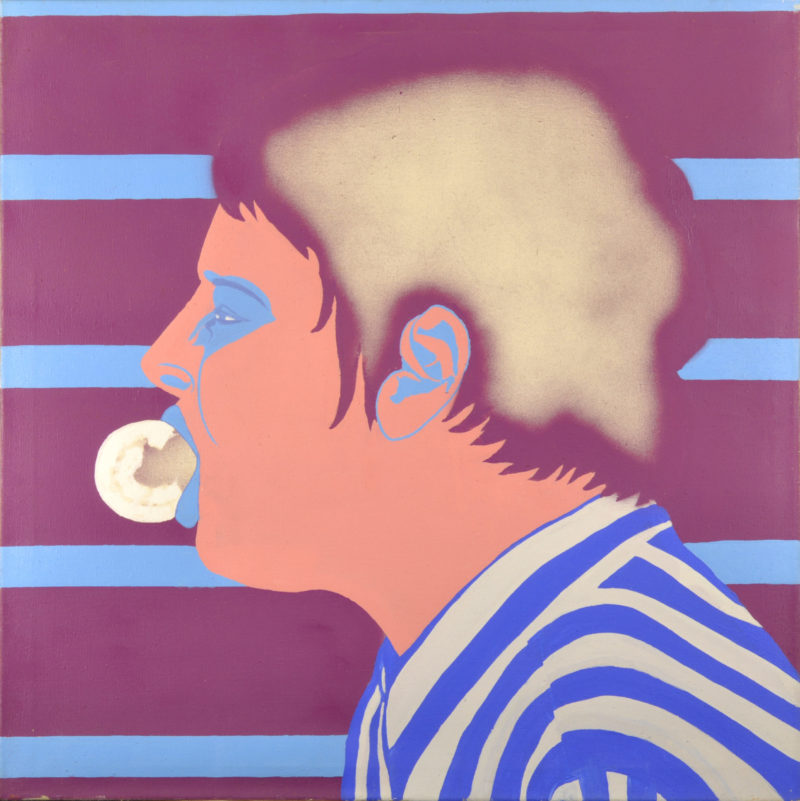 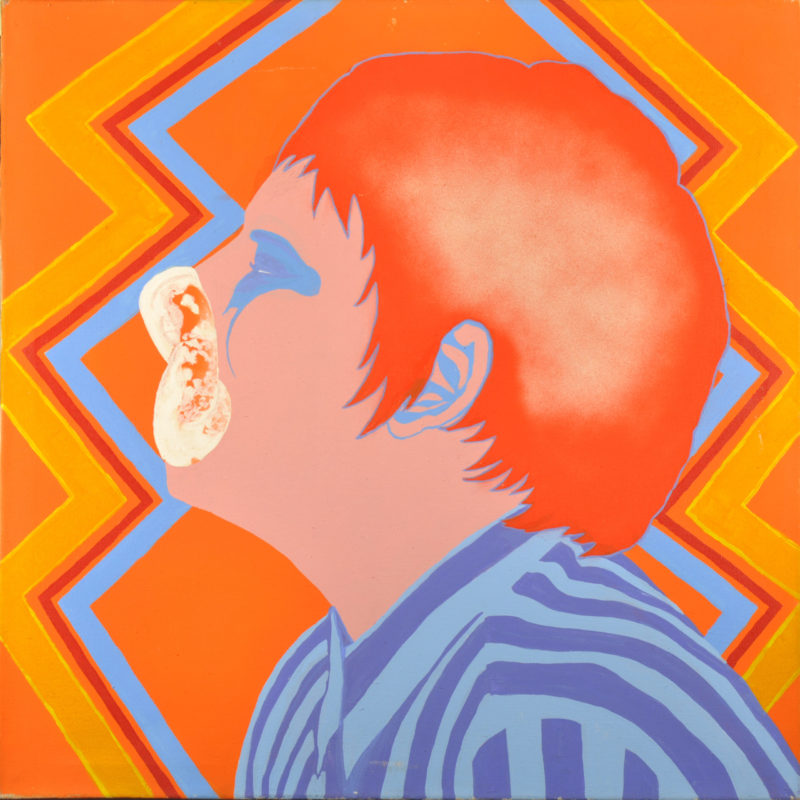