From September 30 to October 02, 2022, two films by the artist Capucine Vever, Rupes Nigra (2018) and La Relève (2019) will be presented for this new edition of Around Video Art Fair 2022.
Rupes Nigra (2018) sketches the contours of an elusive territory, an island caught in the permanent wandering of the magnetic North Pole. Produced as part of the Nekatoenea residency at the Domaine d’Abbadia (Hendaye), the film was supported by the Conseil Départemental de la Seine Saint-Denis, Les Instants Chavirés, the DRAC Île-de-France, the DRAC Aquitaine and the CPIE Littoral Basque.
And as a counterpoint to the exhibition HORIZON(S) for the 40th anniversary of the Frac Grand Large – Hauts-de-France, the film La Relève (2019). Through a dissociation between image and sound space, this film, shot only from the semaphore on the island of Ouessant, plays on the contrast between contemplative images of the ocean space and a voice describing the intense activity that takes place there, but which is no longer visible from the coast. This video was made following his residency at the Sémaphore du Créach’ on the island of Ouessant, summer 2018, with the association Finis Terrae and received the first prize at CAMERA-CAMERA at the UFO festival in 2019. Since 2020, it has been part of the Frac Grand Large Collection. 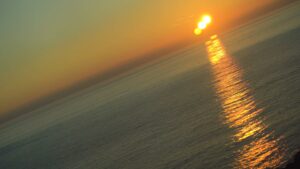 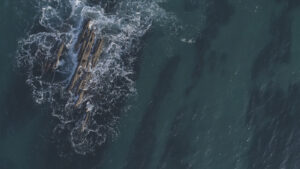