Galerie Eric Mouchet is pleased to present the exhibition Down There by Christine Barbe, from January 27 to March 10 2018

Christine Barbe’s career has been punctuated by shifts: between media, between cities, between continents. She moves across different spaces looking for unexplored places where with abandon she can “ink herself into her surroundings.” It’s the artist’s own choice of words, one that crops up several times in our first conversation and which I reproduce here deliberately. To ink oneself into one’s surroundings: a curious phrase that given her original specialisation is replete with meaning and significance. For although it no longer forms part of her active repertoire, Christine Barbe is a trained engraver: etching, inking, acids, paper, metal, matrices, precision, and lacquering are all part of her original skill-set. While her years of peregrination have seen her broaden her expression to encompass painting and video, the tools and gestures that define her painted works still clearly stem from an affinity for engraving. The process begins with the shooting of a scene – woodland, forest, landscape, a place of known geography – in China, France, the United States, wherever the artist happens to be living and working, wherever her foreignness seeks to ink itself into its surroundings.

The photographs are modified, merged, blurred, and cut into a raw material that she then works into elements of composition: a pile of stones covered in green moss, a muddy pathway scarred by the tracks of a digger, an abandoned greenhouse, a plastic pipe jutting out of the soil, a swarm of electric pylons, and so on. Photographic elements are printed onto canvas, interspersed with empty spaces filled by the artist using extraordinary techniques. She prefers indelible ink to oils or acrylics, applying it with sponge and resin rollers, tarlatan gauze, and cloth. Her tools are those of the engraver, a brush only appearing when the finished work is varnished. Photo and ink combine to create landscapes bathed in colours both real (green, brown, black) and surreal (green, mauve, orange, blue). These carefully crafted scenes mix natural landscape elements with elements of human transformation. Christine Barbe captures places in transition that seem frozen in time, abandoned sites where only remnants subsist: a concrete stairway, a fragment of railway, a metal container littering the ground, an abandoned building stripped to its structure, all giving indirect insight into the natural world. The forest plantations around her workshop have been harvested and replanted repeatedly, ploughed through with paths; they too are the result of human construction.

Her perception of these landscapes is by no means tinged with wonder. On the contrary: she times her photo shoots deliberately to coincide with late autumn and winter; trees are bare, of graphic and strangely troubling presence; her colours, strokes and light depict a natural world contaminated, toxic, irradiated, inhospitable. Layer upon layer, her works convey human-scarred landscapes wherein she projects her quest to comprehend and tame territories unknown. “But the outsider persists, and intrudes. And that is what is difficult to concede or even conceive of…”[1] Physical and mental spaces that push us out, yet offer a canvas for our fears, our fantasies, our imagination. 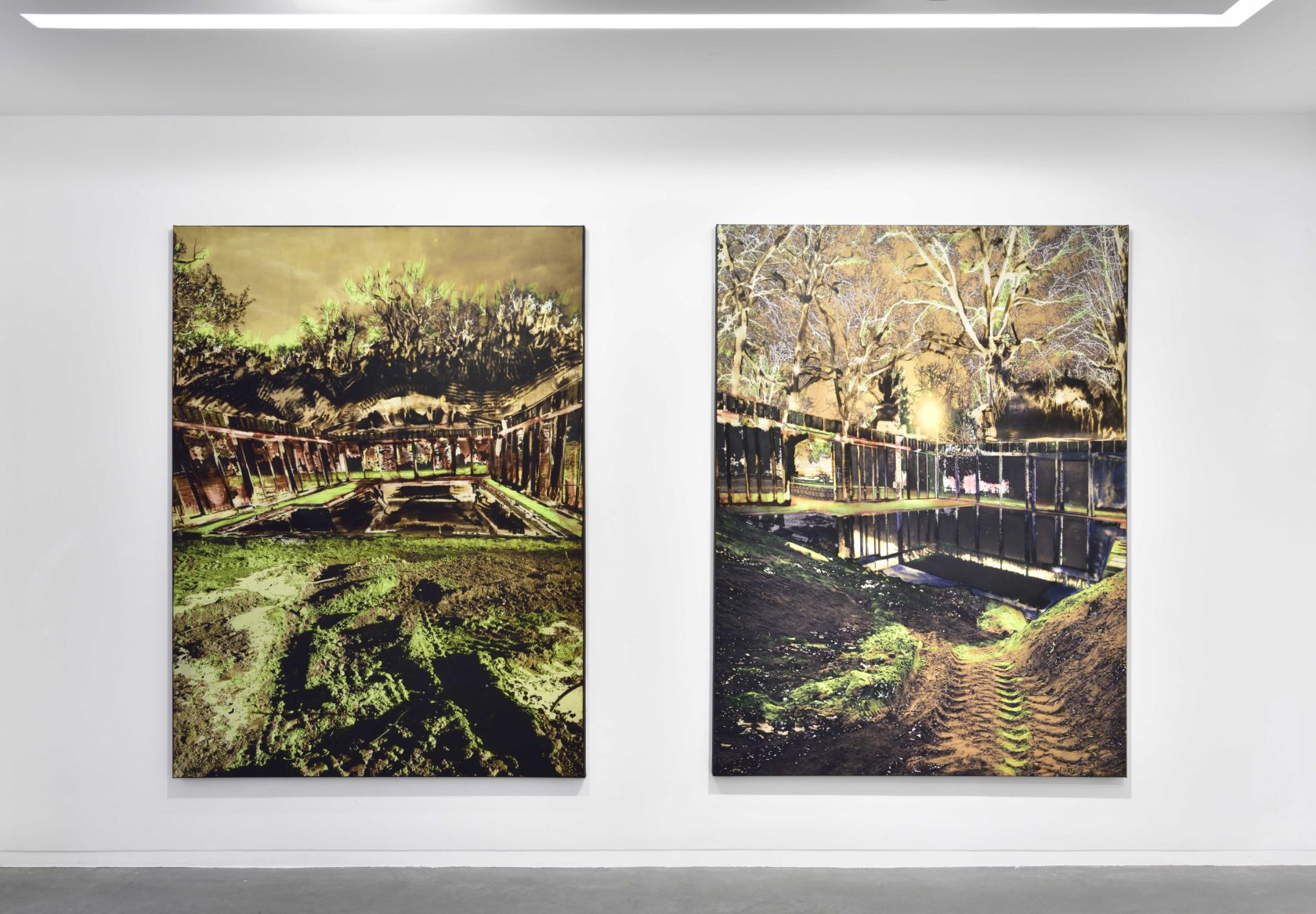 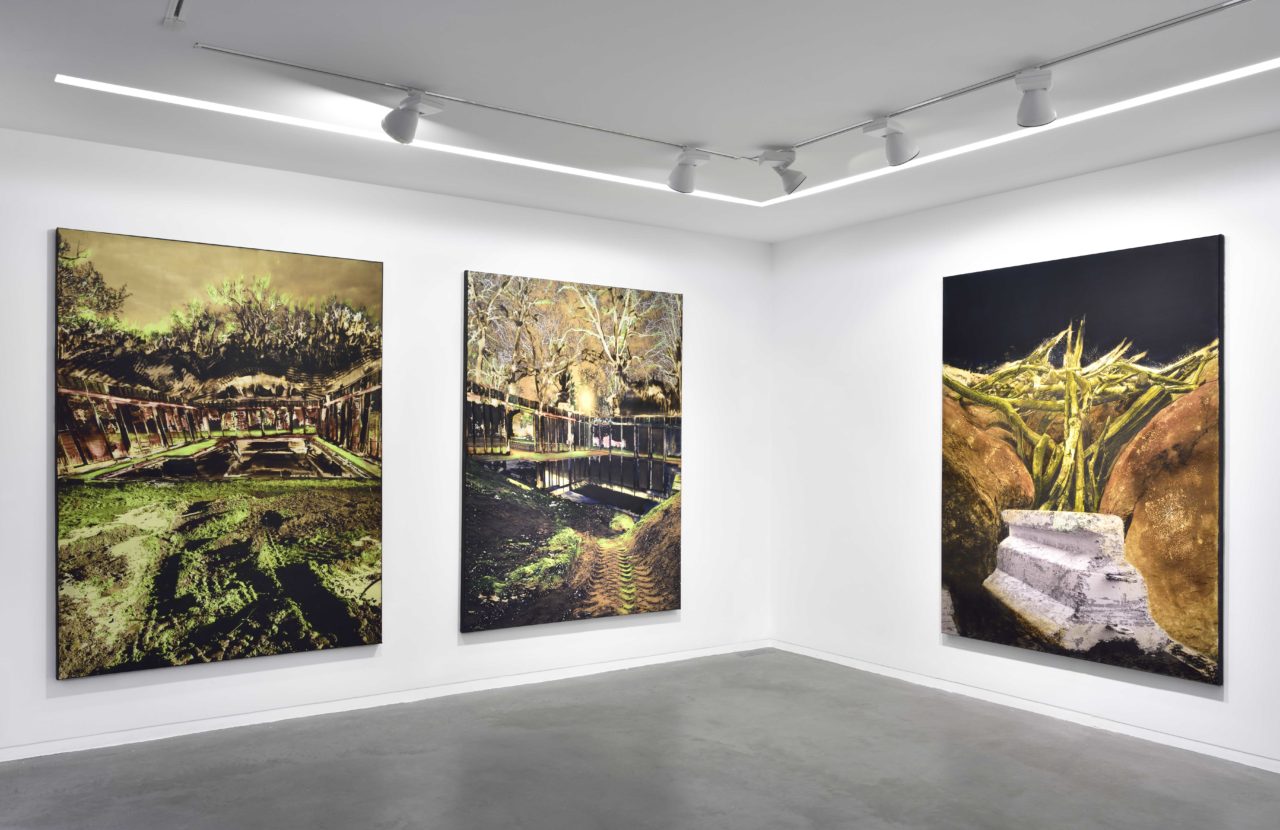 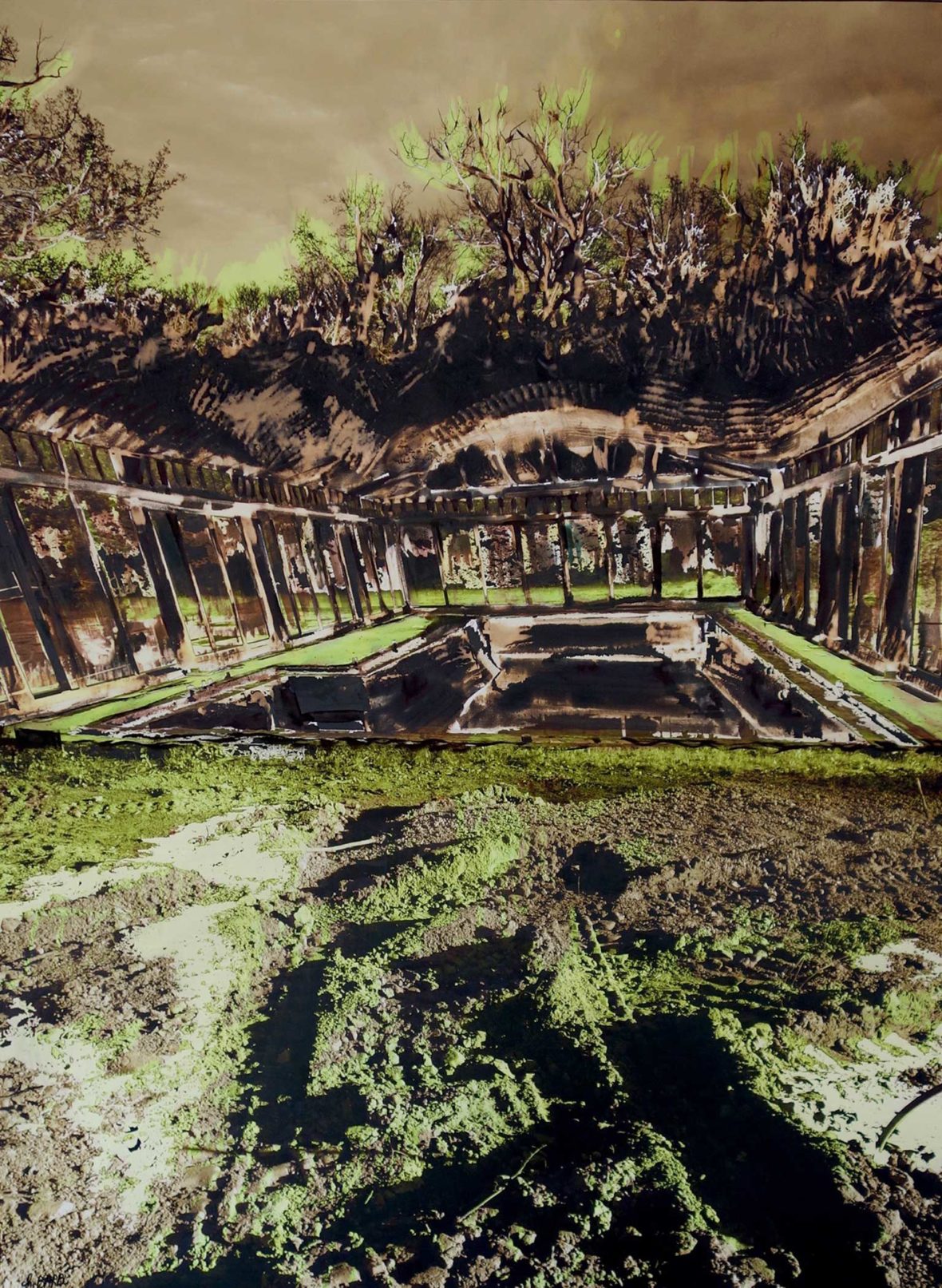 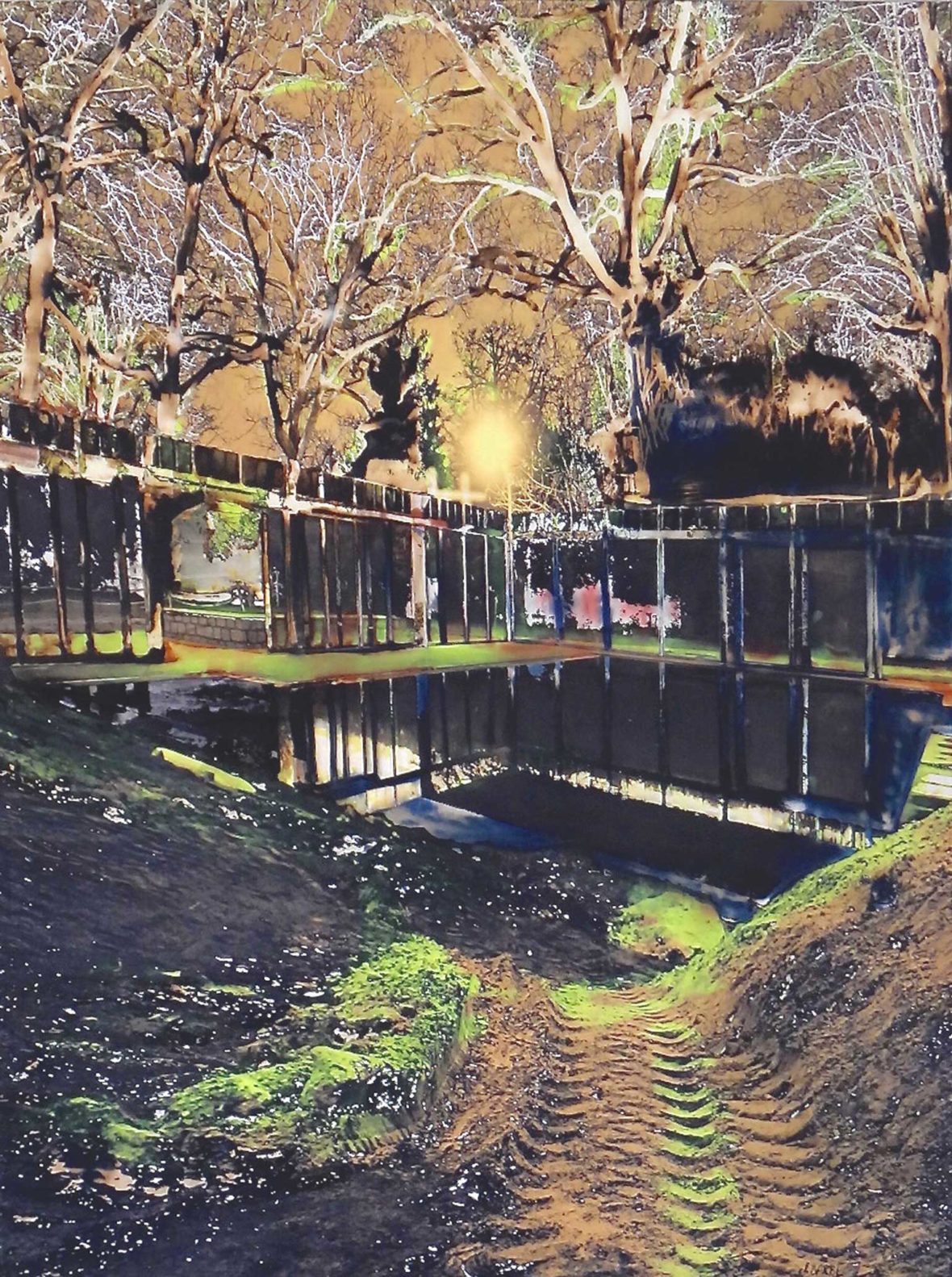 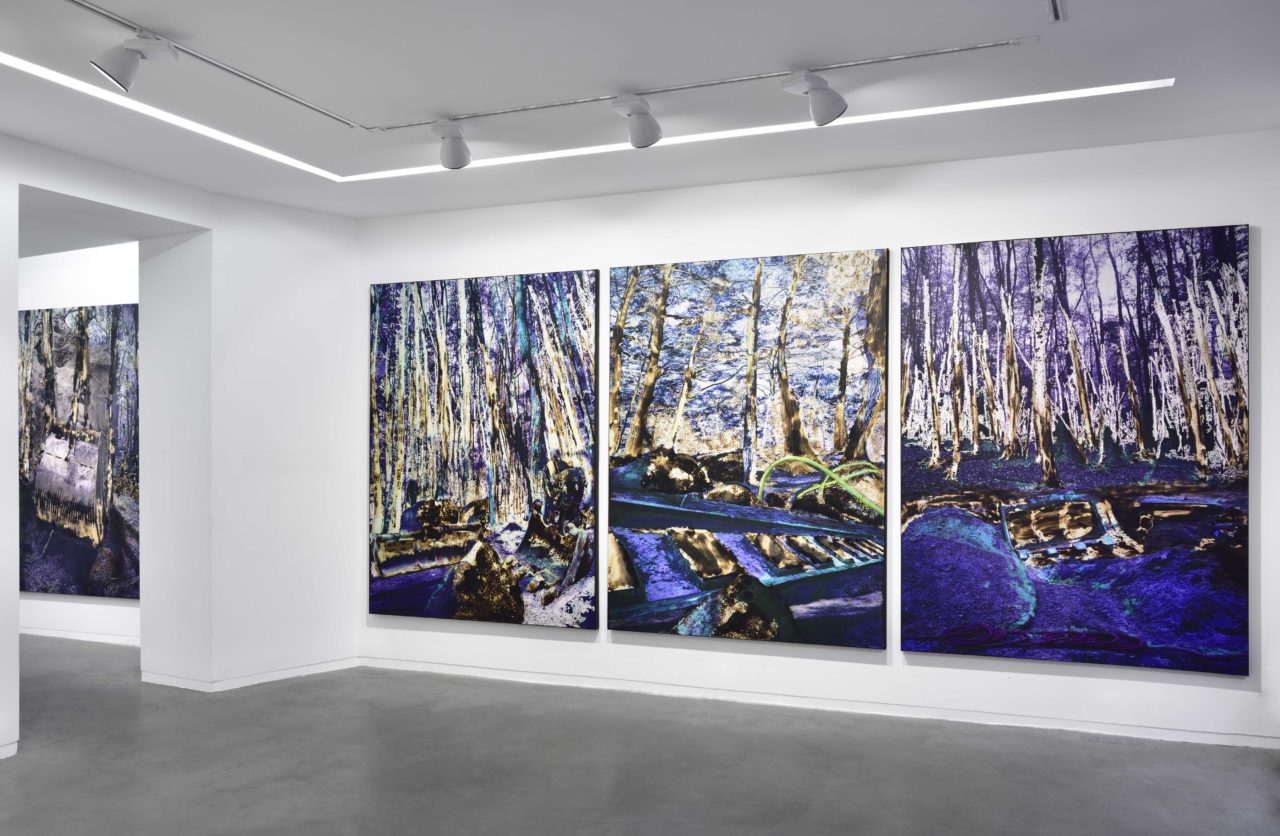 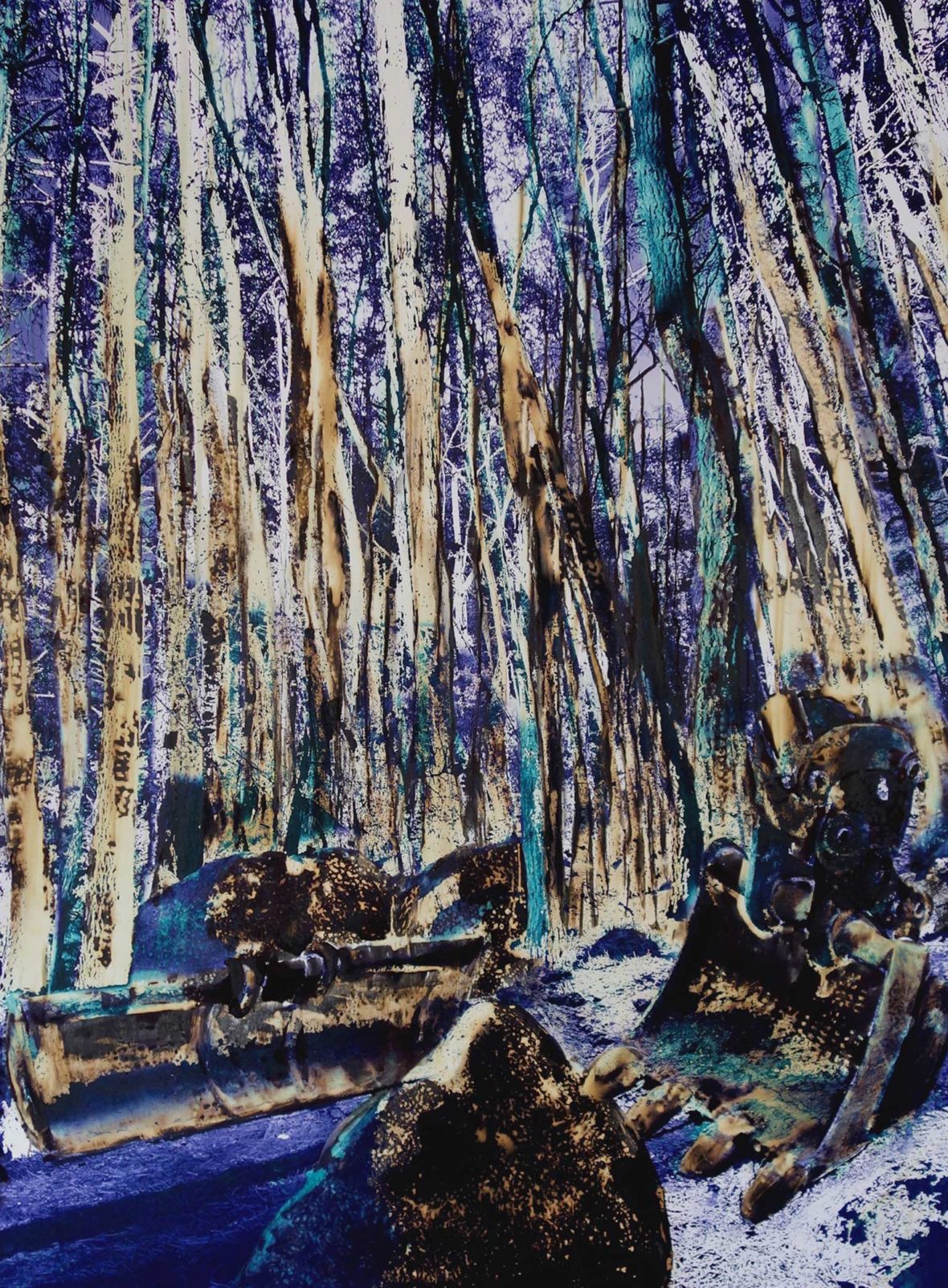 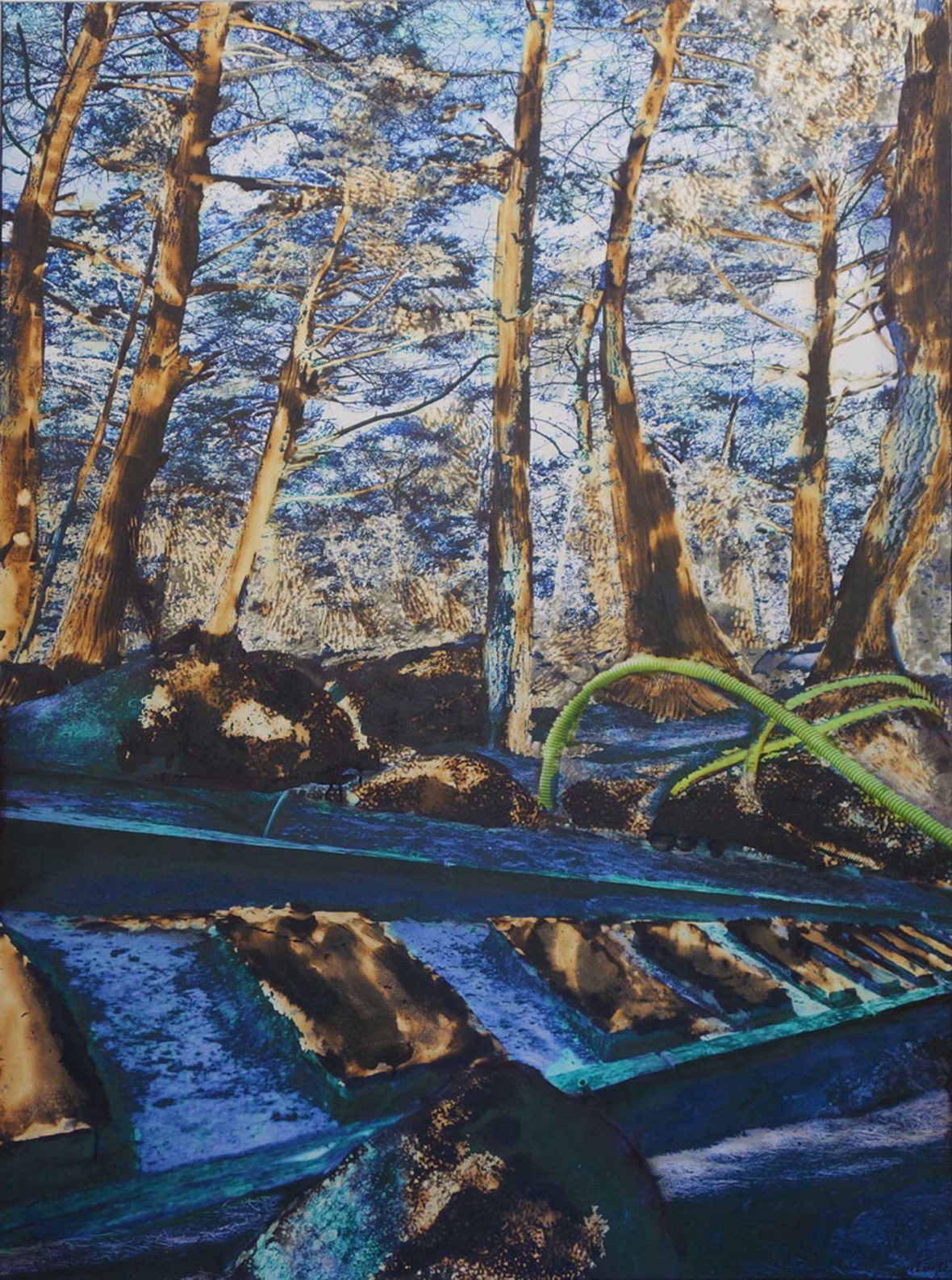 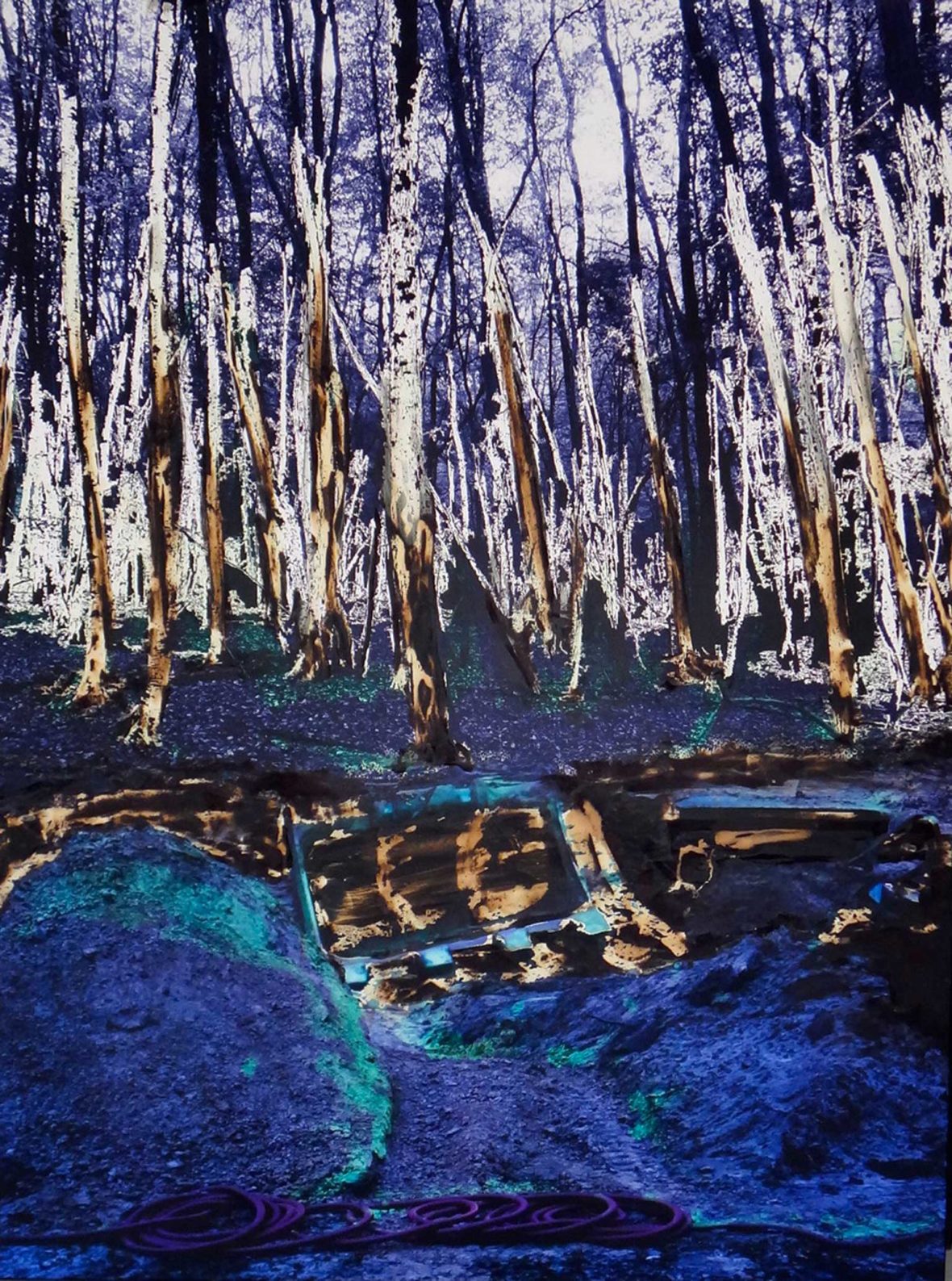 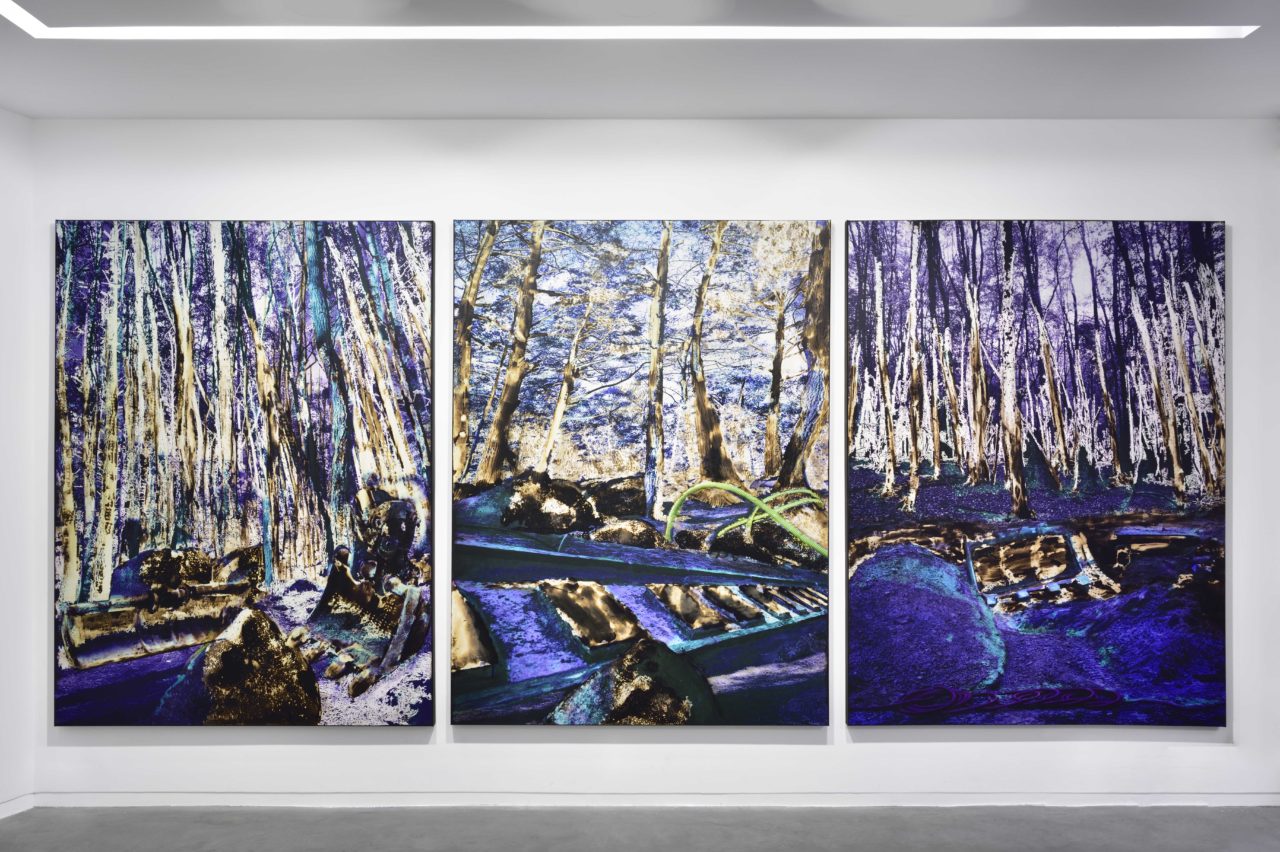 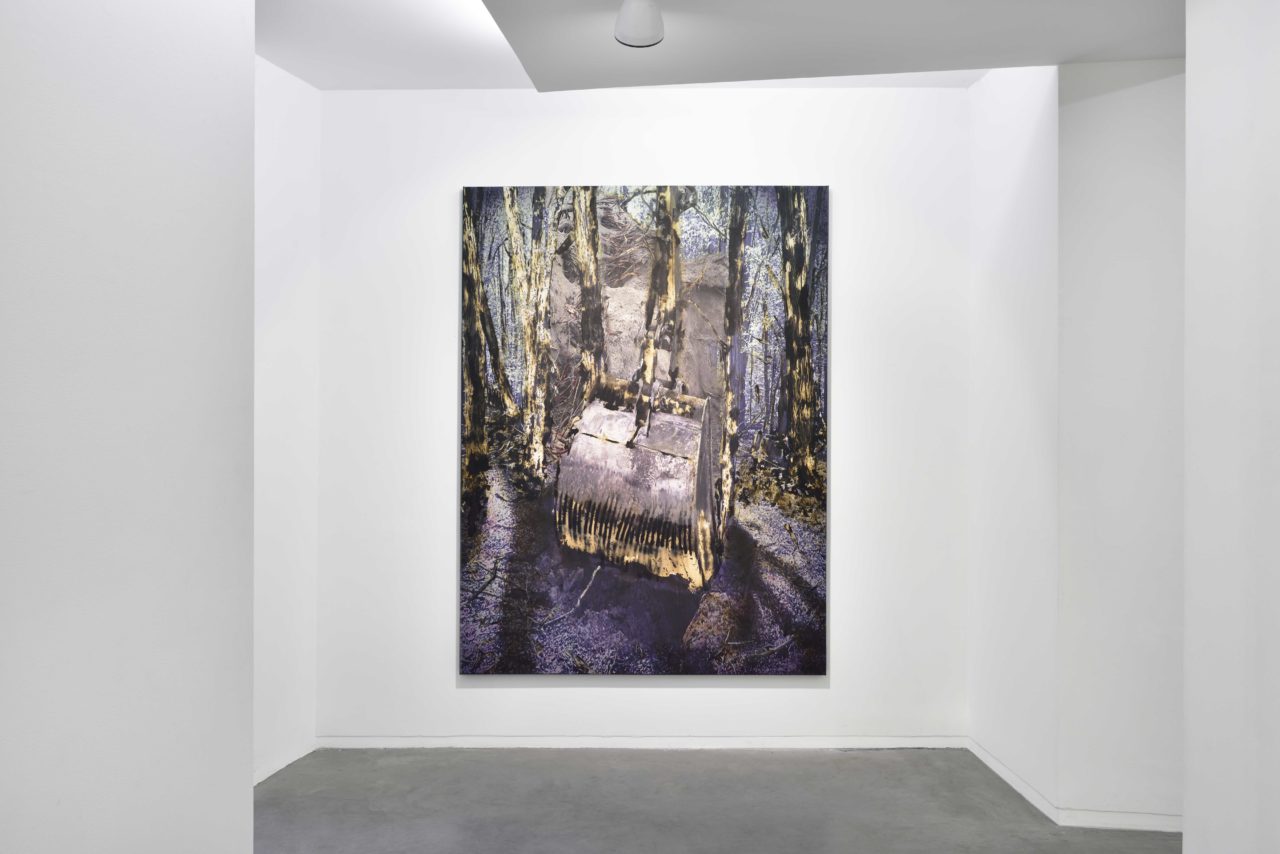 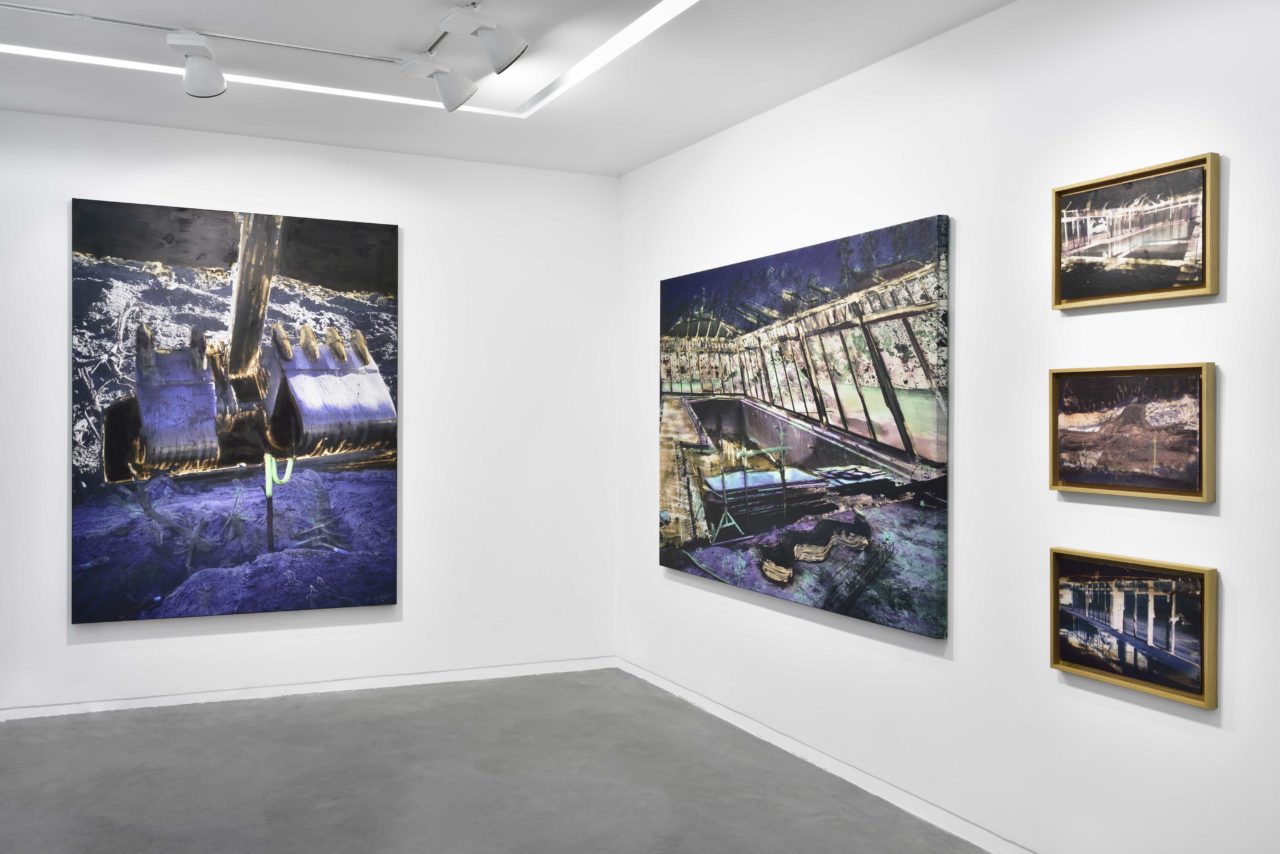 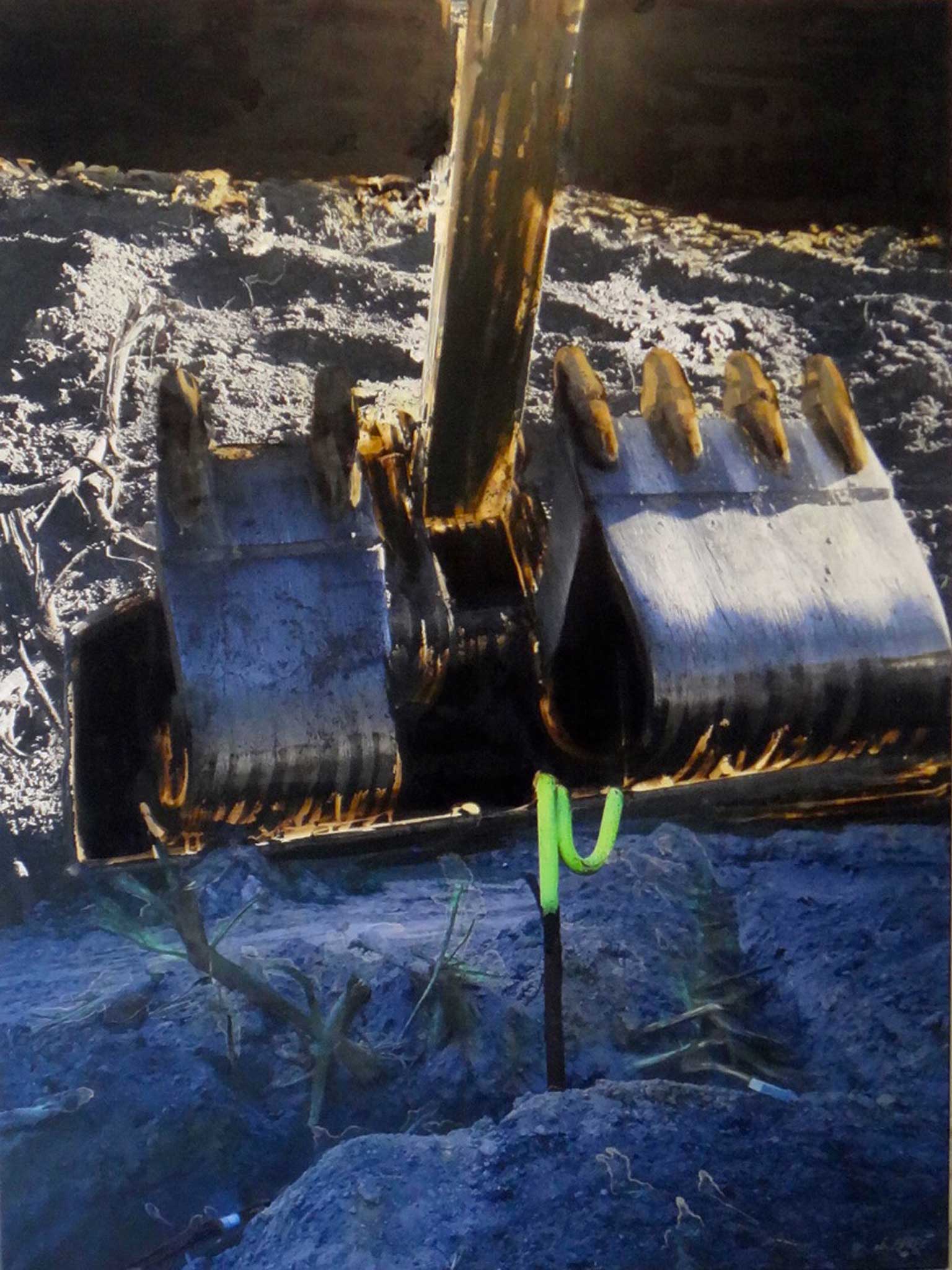 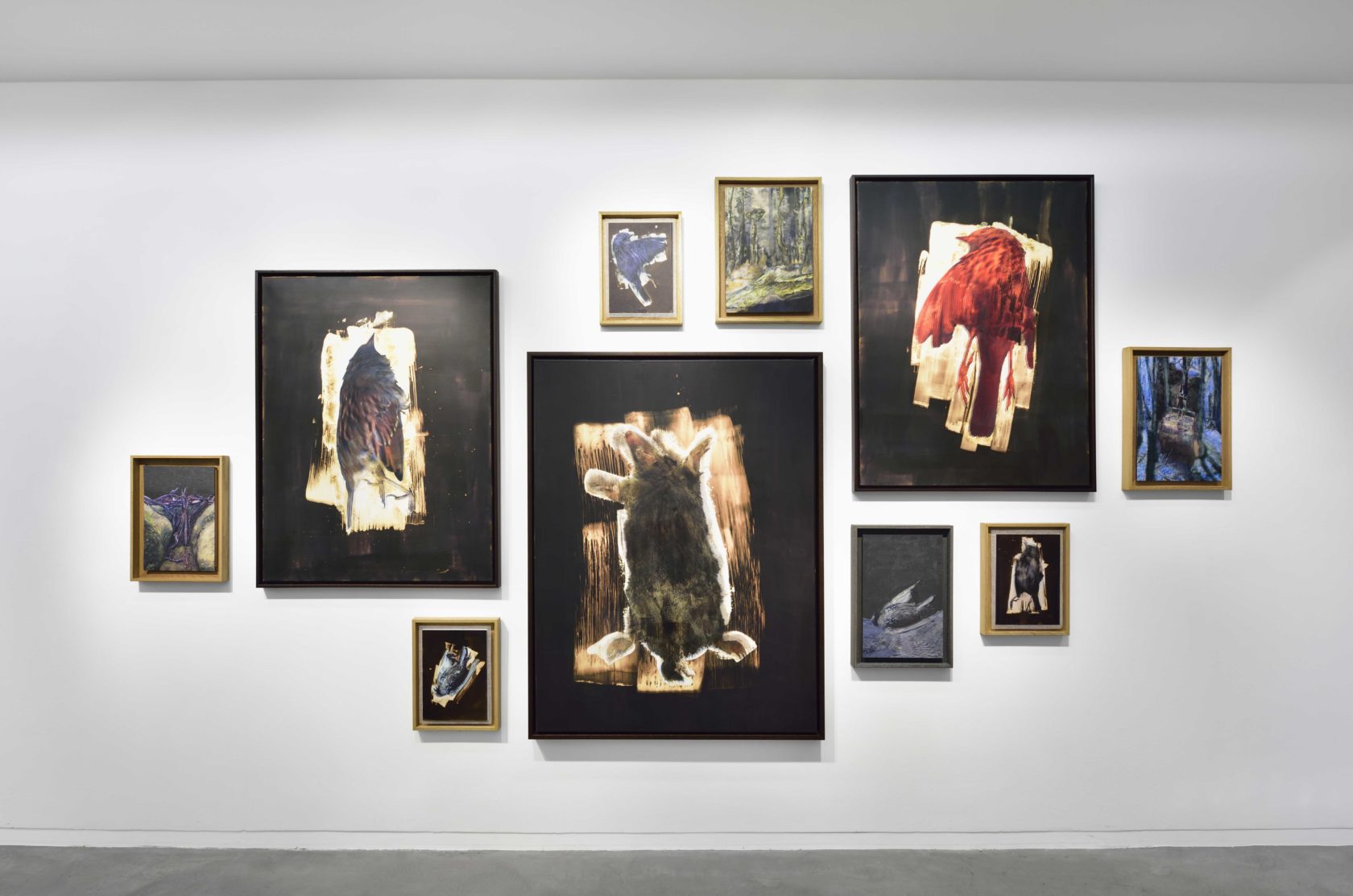 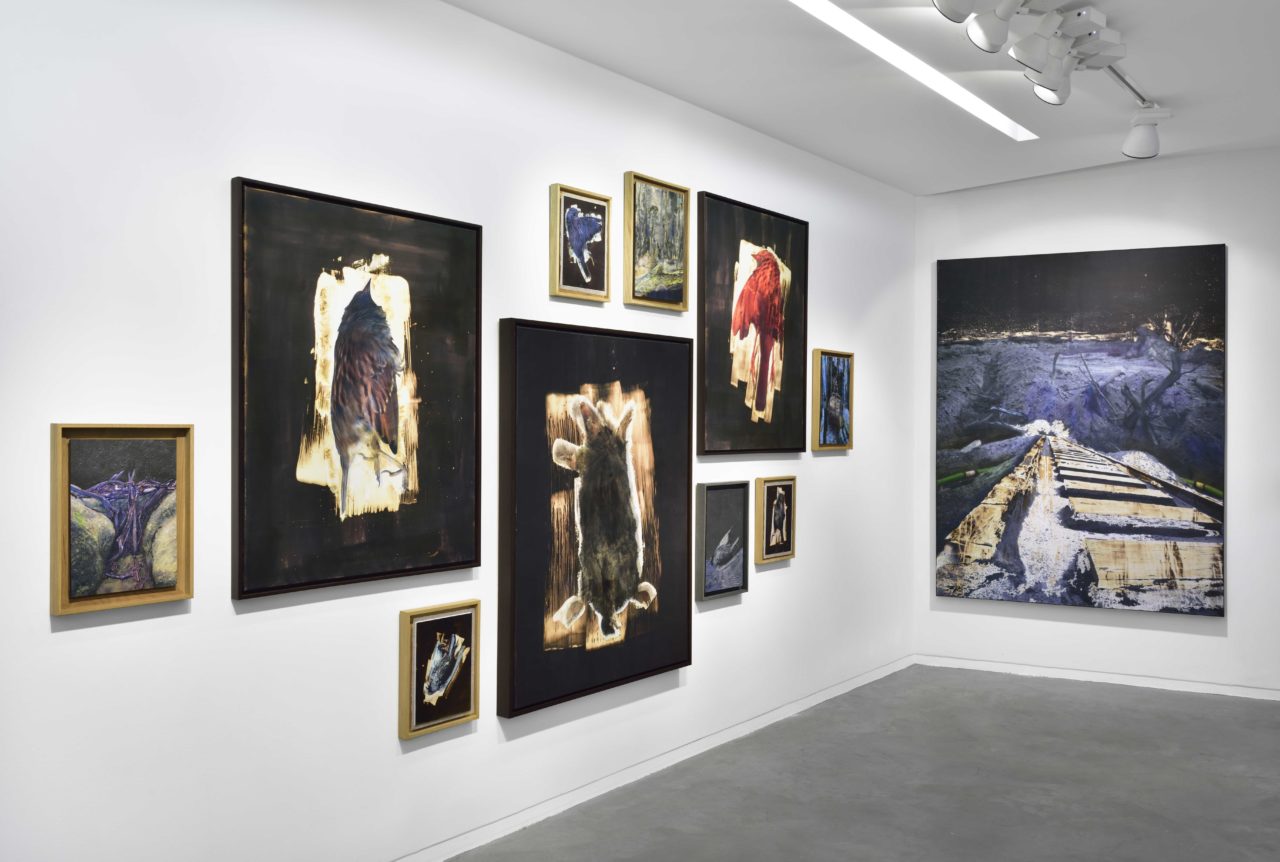 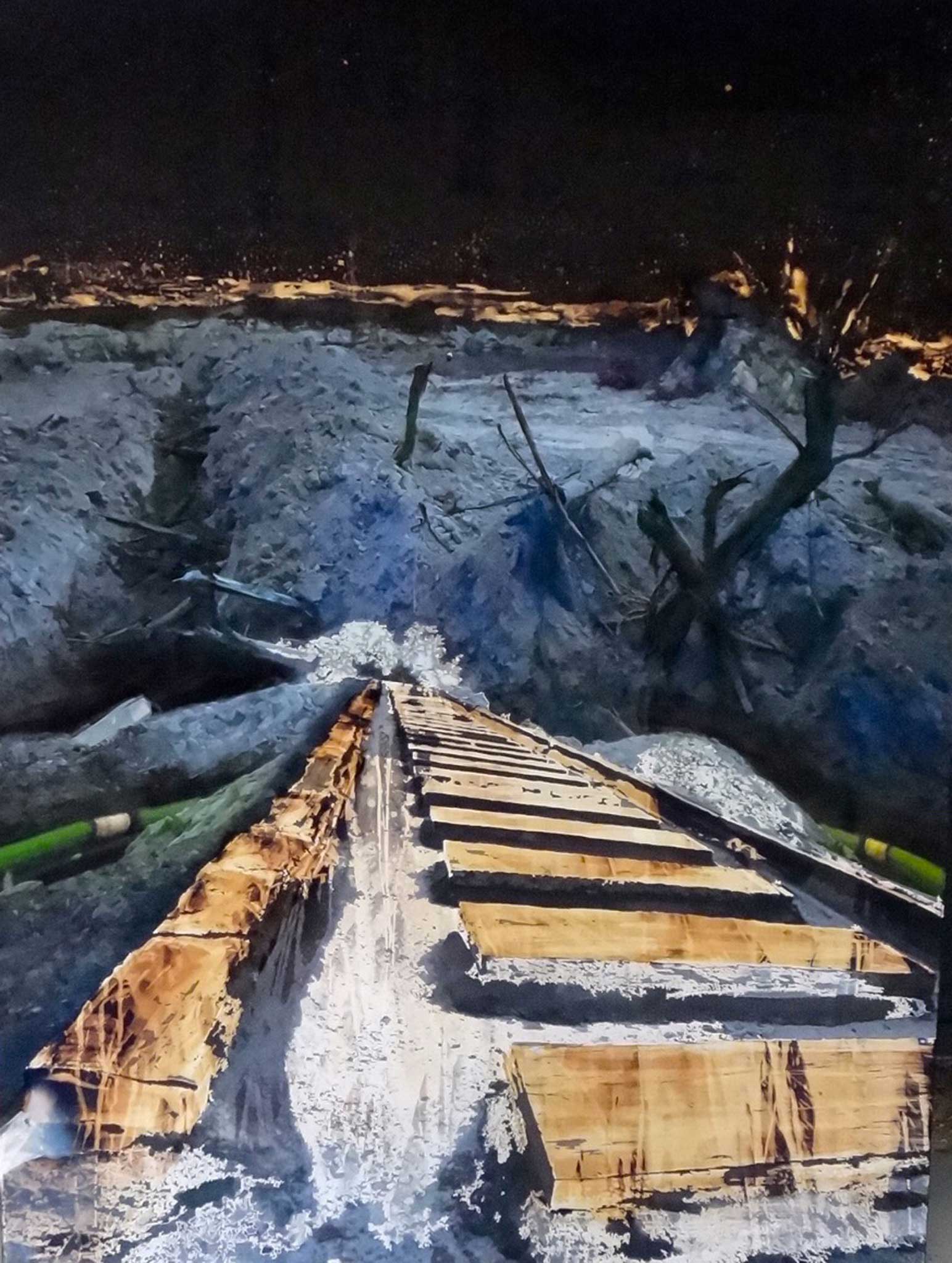 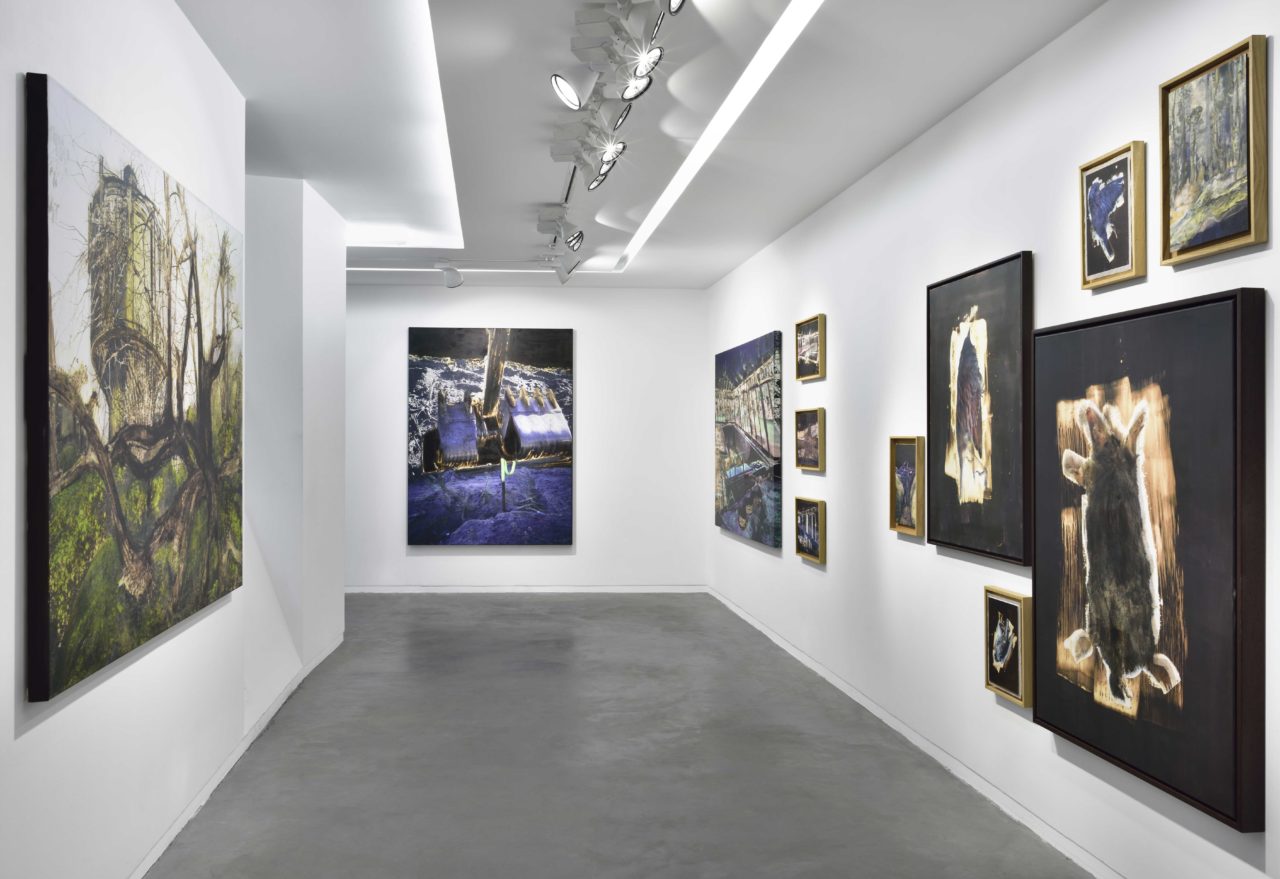