For its first exhibition of the year 2023, Galerie Eric Mouchet is pleased to invite the artist Gwendoline Perrigueux to take over its Parisian space. Following up her last exhibition «Velvet Lashes» in 2019, the artist invites us to discover an intimate and bewitching exhibition, a sort of « plaisirothèque » of works to be looked at but also to be touched.

The sofa is leather, 1960s style, padded and powder pink. It has its importance; indeed, it’s a real centrepiece in Gwendoline Perrigueux’s living room, which is also her studio. In front of the large windows hang mauve and salmon curtains. And nearby, a fuchsia pink plastic armchair of somewhat questionable aesthetics. It could be the boudoir of a modern-day courtesan, a safe place where reigns joyful yet modest lasciviousness. In her faux fur basket, Rosie the chihuahua is chewing on a black PVC vine. It comes from a sculpture hanging on the wall, a network of wicker and copper tentacles held together by neoprene knots. Its organic form seems to gently draw us towards it as though to better recharge us with its mystical energy. This work, like the number of other pieces that unfold in the artist’s living room, is revealed in Gwendoline Perrigueux’s personal exhibition entitled « Fluffy Wink » and presented at the Galerie Eric Mouchet.

Far from being neutral, the works that make up the exhibition are on the contrary charged with an intimate history and imbued with a past life, that spent in the artist’s studio-slash-living room above the leather sofa, among the feathers, the «fluff» and the «wizzz». On the walls of the gallery are hung Douceur trempée dans la baignoire (“Sweetness soaked in the bathtub”) and Danse sur canapé rose (“Dance on a pink sofa”), the titles of which evoke another spatio-temporality. Borders, Gwendoline brushes them aside. Love, the studio, life, Ovidie – whom she reads while imagining sculptures – and Monique Wittig intertwine in the work of this artist, who offers herself entirely in this exhibition with the playfulness and sensuality that characterize her: a sensuality that emanates from her sculptures to compile a kind of pleasure library, a place of erotic interactions among human beings and even beyond.

Her works such as Double Elle or Suivantseslangues, which drip with extra-corporal pleasure, resonate with the philosophical movement Object Oriented Ontology which maintains that objects have an existence independent of human perception. This movement, founded by Graham Harman in the late 1990s, questions the privilege of human existence at the expense of non-human objects. As though in extension of this thought, the artist’s works carry her fantasies while at the same time revealing a hedonism that is specific to them. The association of their organic forms with flexible materials leads to a drift towards a mischievous narration that is also reminiscent of Sigmund Freud’s theories on the relationship between artistic creation and sexual impulses: these impulses that tickle our senses and burn our fingertips while the works silently invite us to feel them and to manipulate them to grasp all their nuances.

In the blink of an eye, Gwendoline Perrigueux indulges in a clever game of perception. She chooses materials for their similarities and assembles them for what they are not in a continuous flow of incessant transformations. This shift in meaning at play in her work is embodied also in the status she attributes to her objects. Diffident curiosities in gilded metal, suspended from their accomplices, punctuate the exhibition like saucy commas. These are sculptures-à-porter, a feathered bracelet, a nipple device that the artist wears in full view during a sculptural stripping wherein the works navigate between several possible existences. Wrapping her arm in a cold embrace, a metal and neoprene armband completes the armour that the artist removes to reveal her own body. Because in the end, everything is a question of relationships – to oneself, to the other. To lift the veil, to be seen, to be touched. Offering your privacy, in a mixture of generosity and modesty. And then finally, surrendering to the fortuitous experience, letting yourself be transported into the hybrid universe of Gwendoline Perrigueux where conceptual forms mingle with carnal desires. 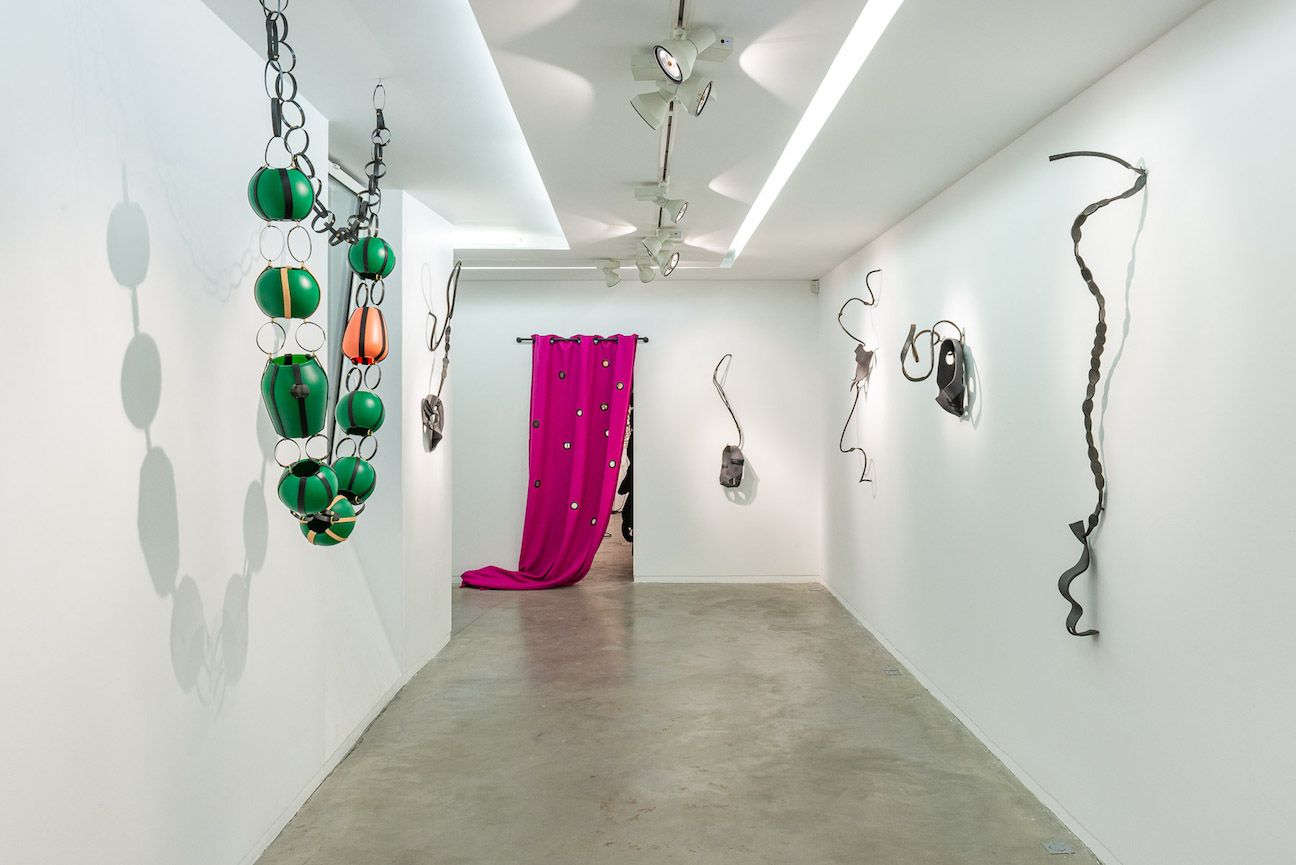 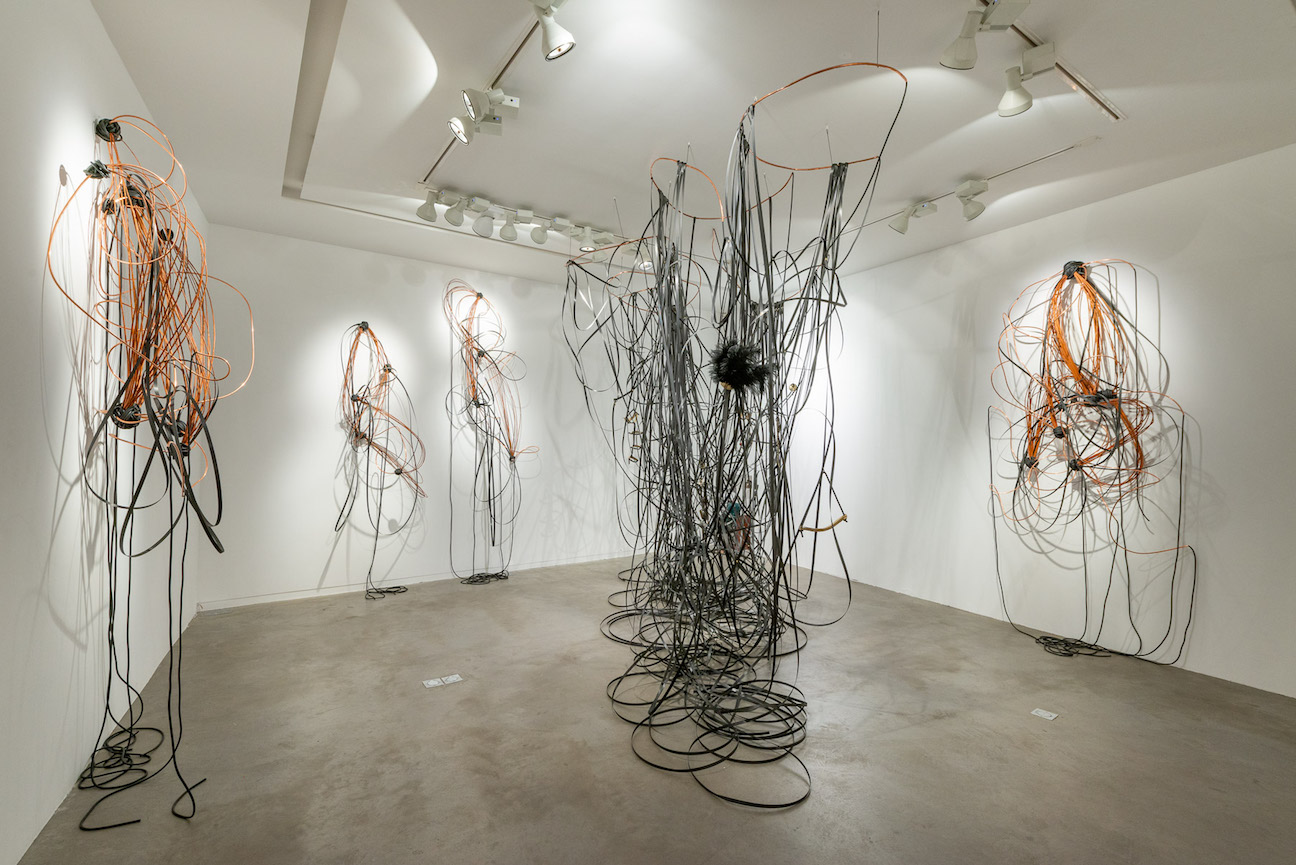 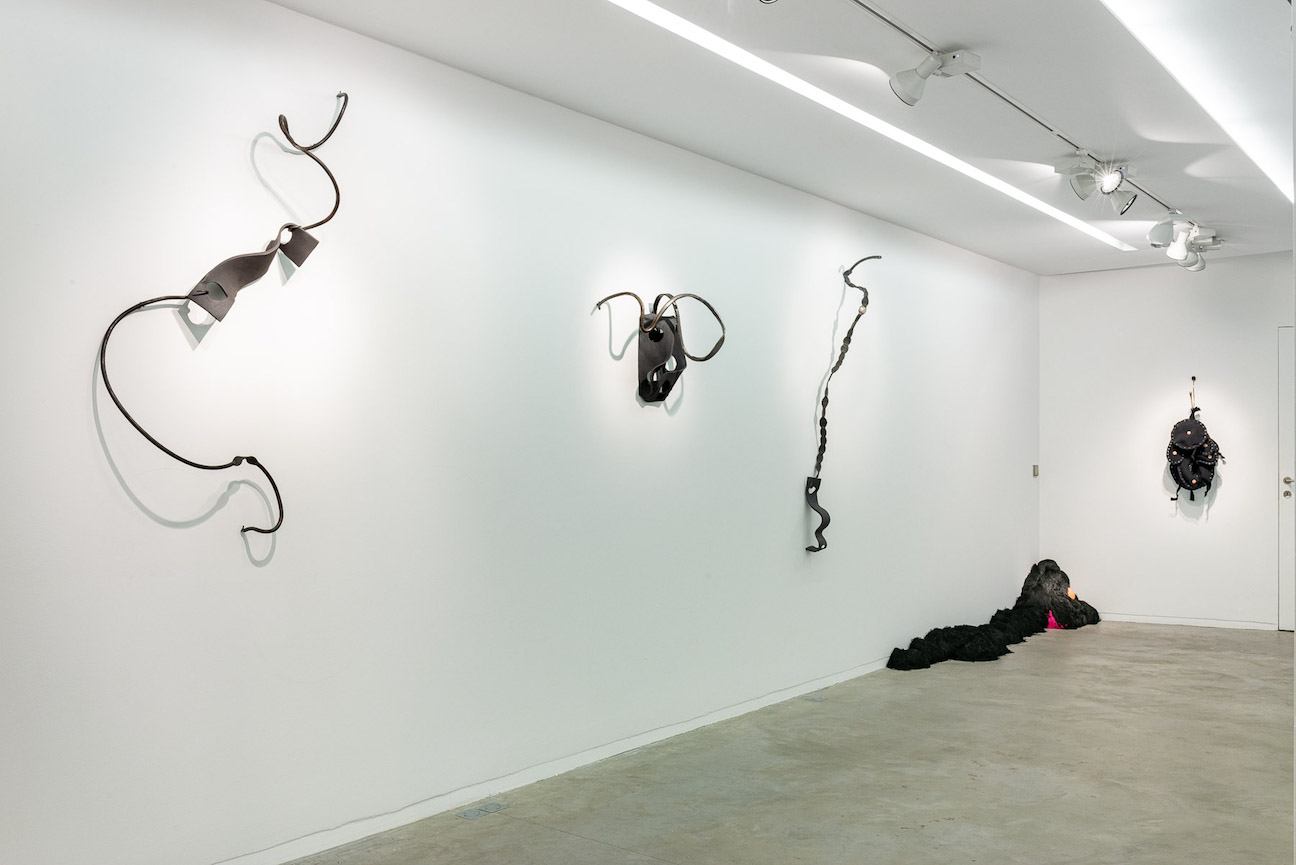 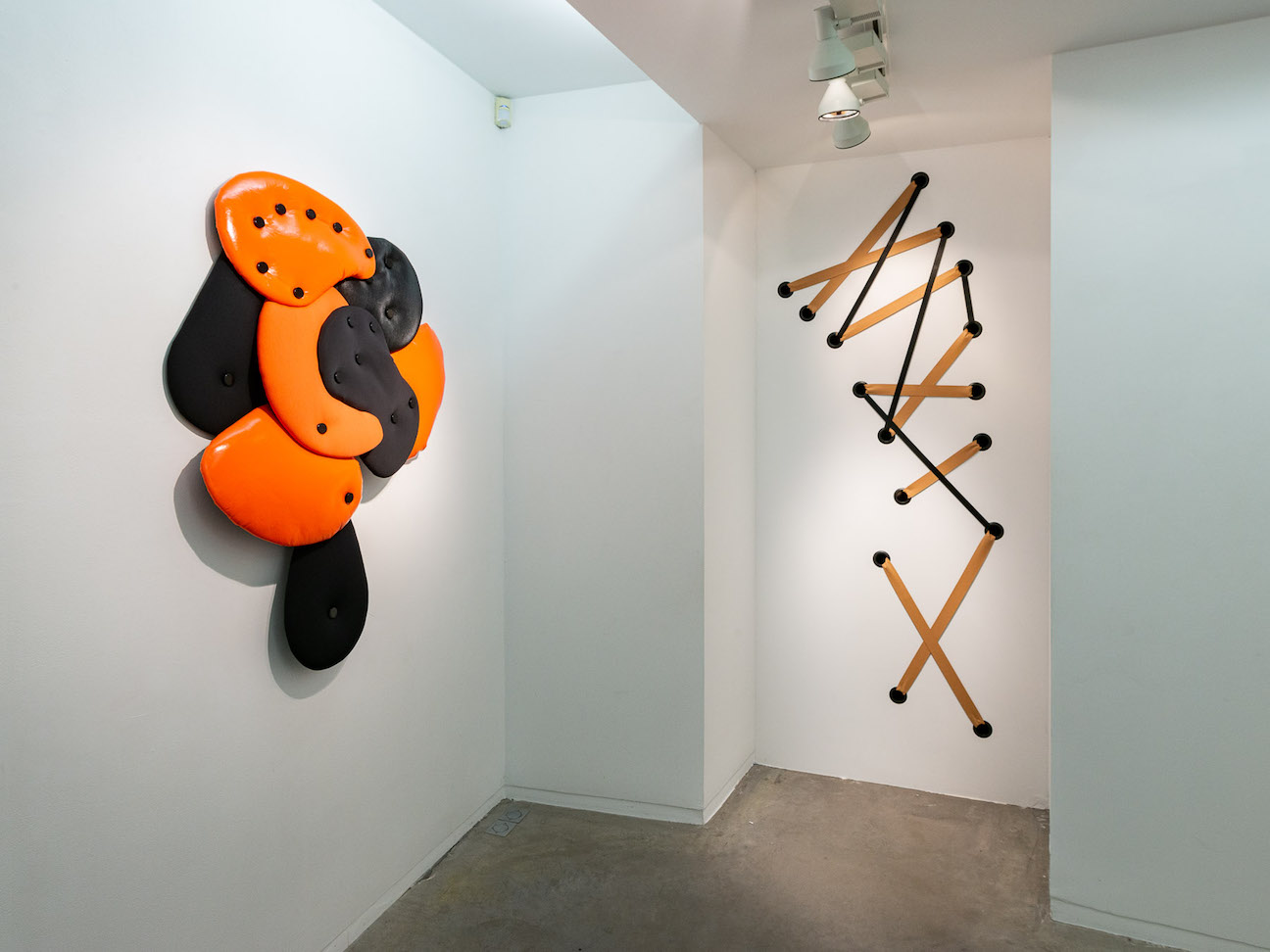 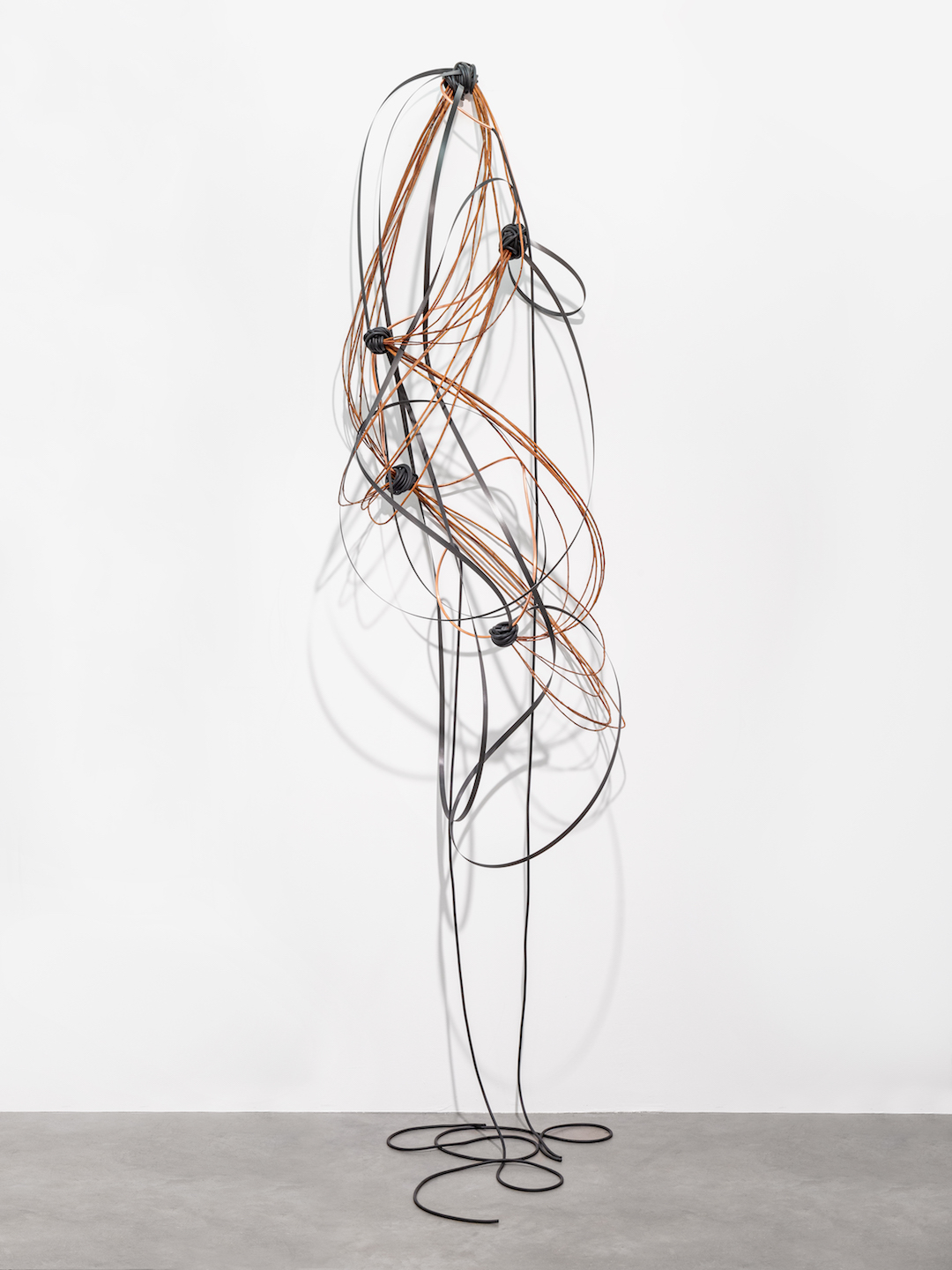 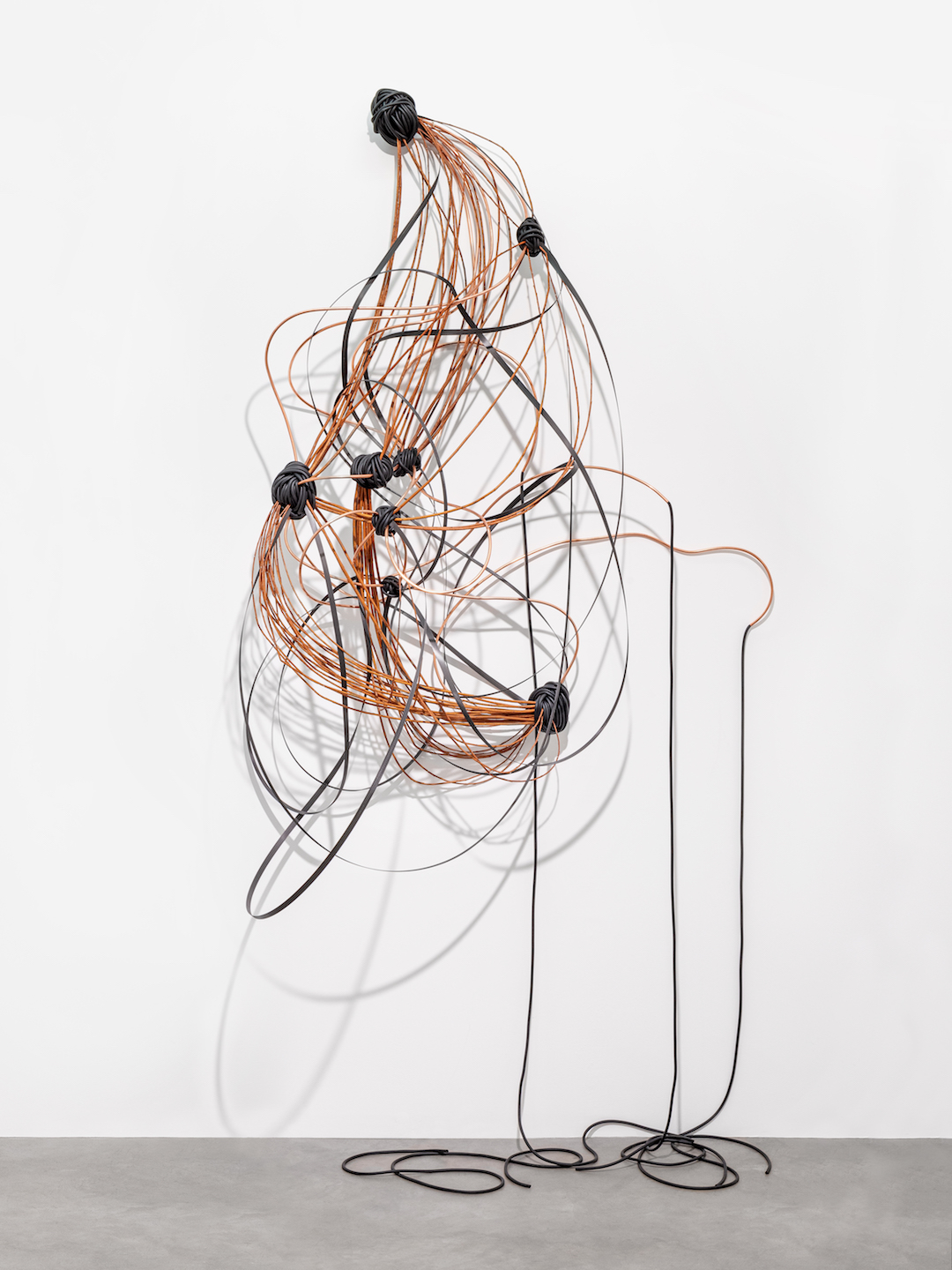 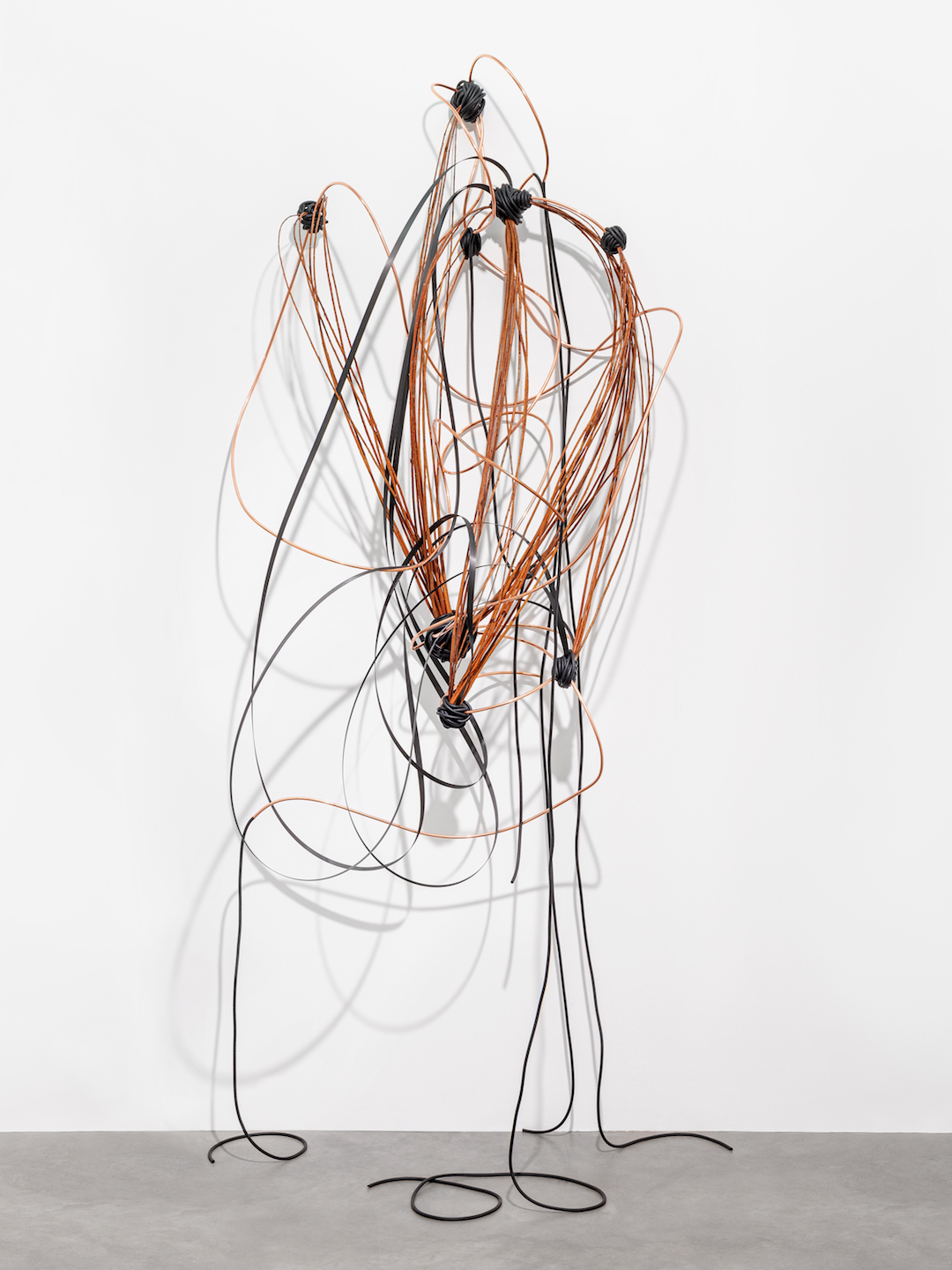 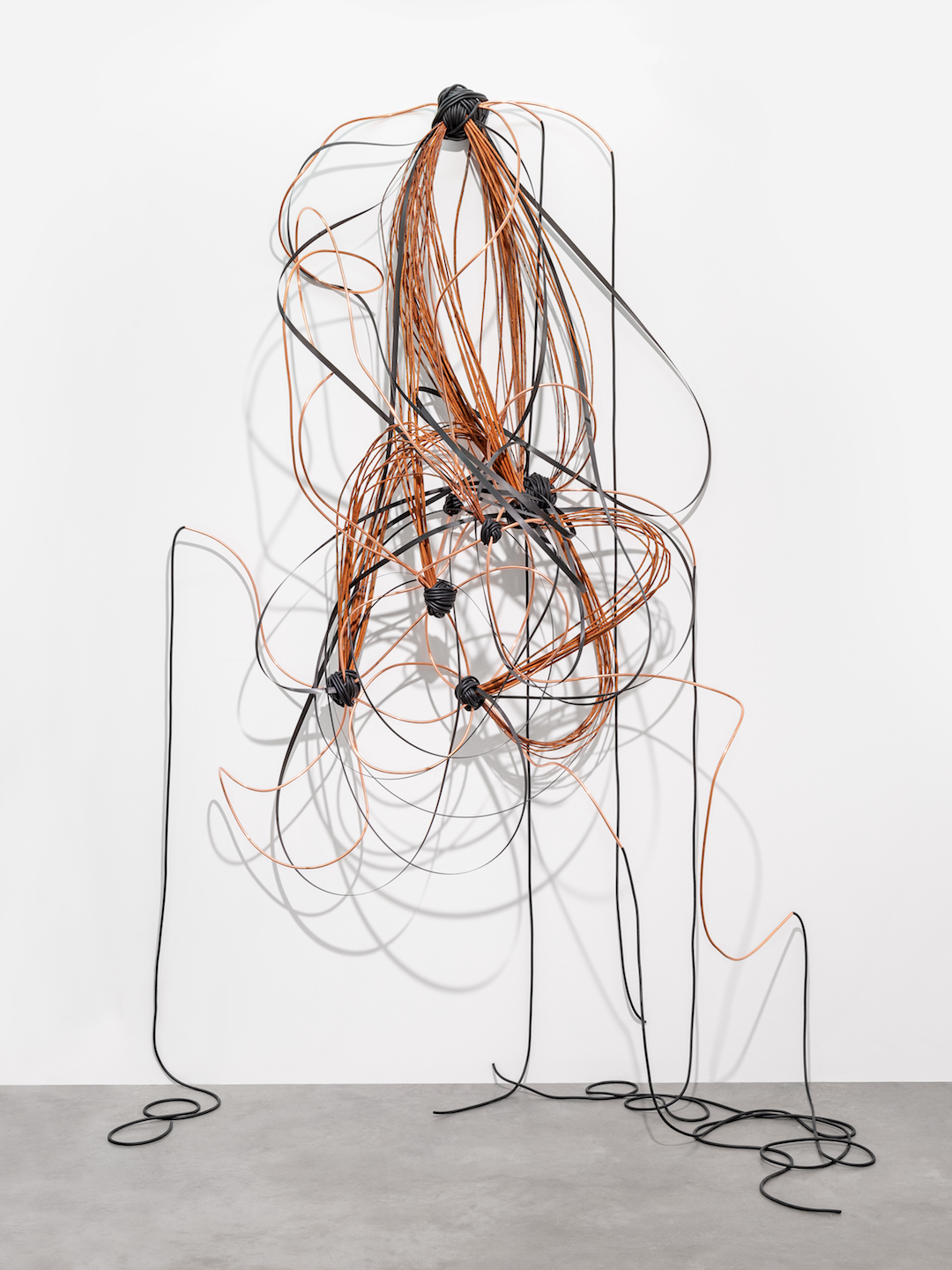 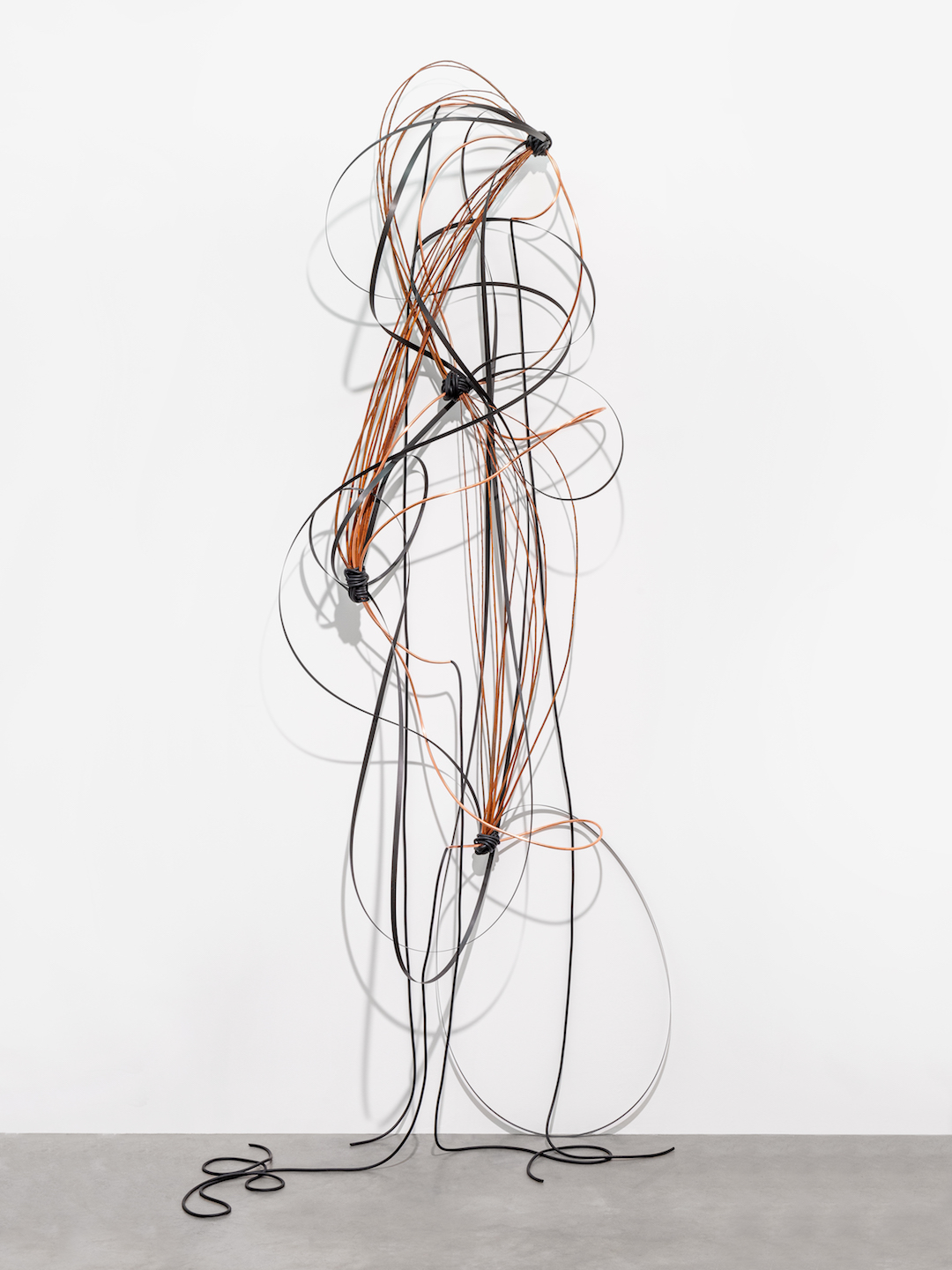 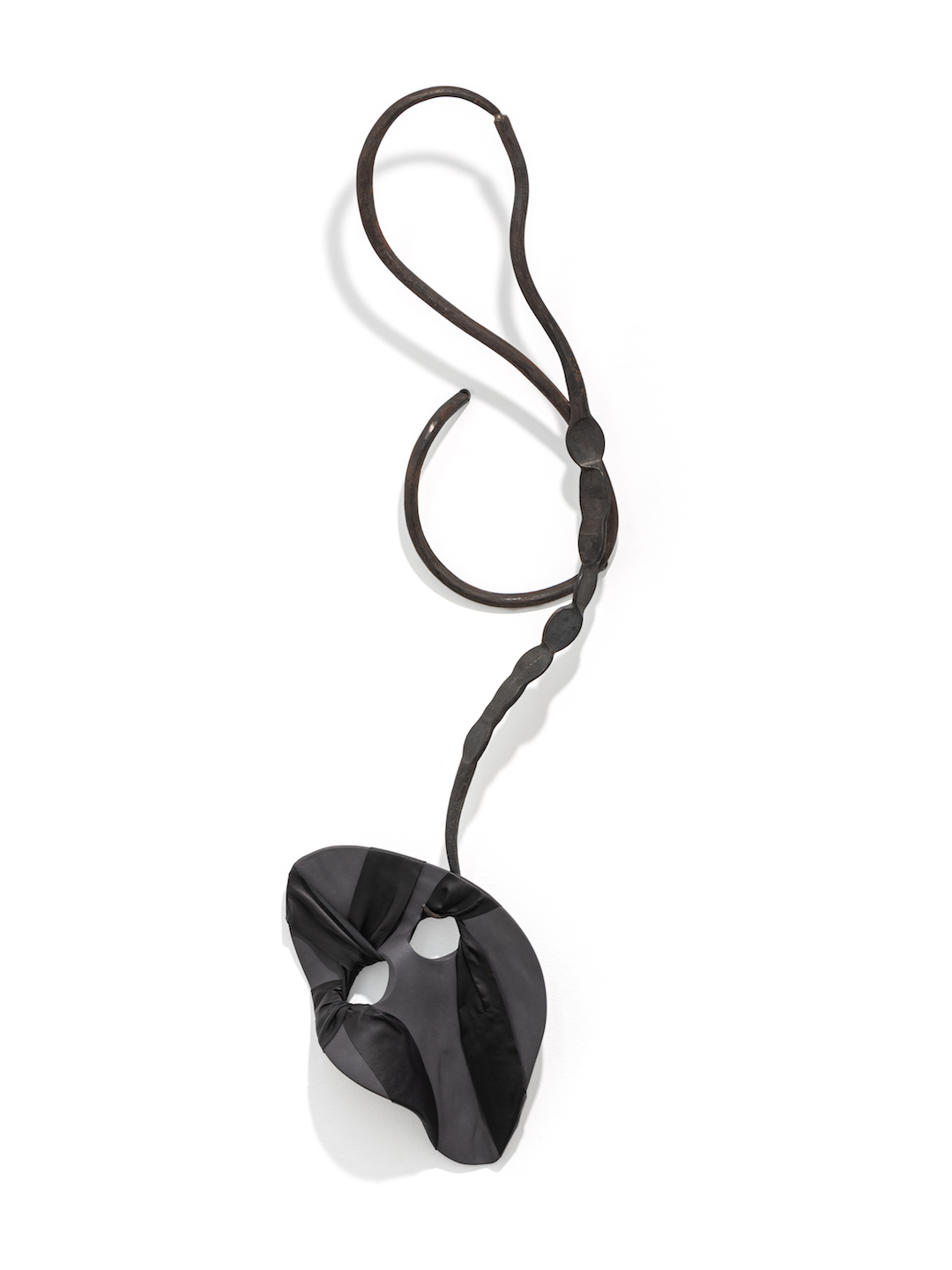 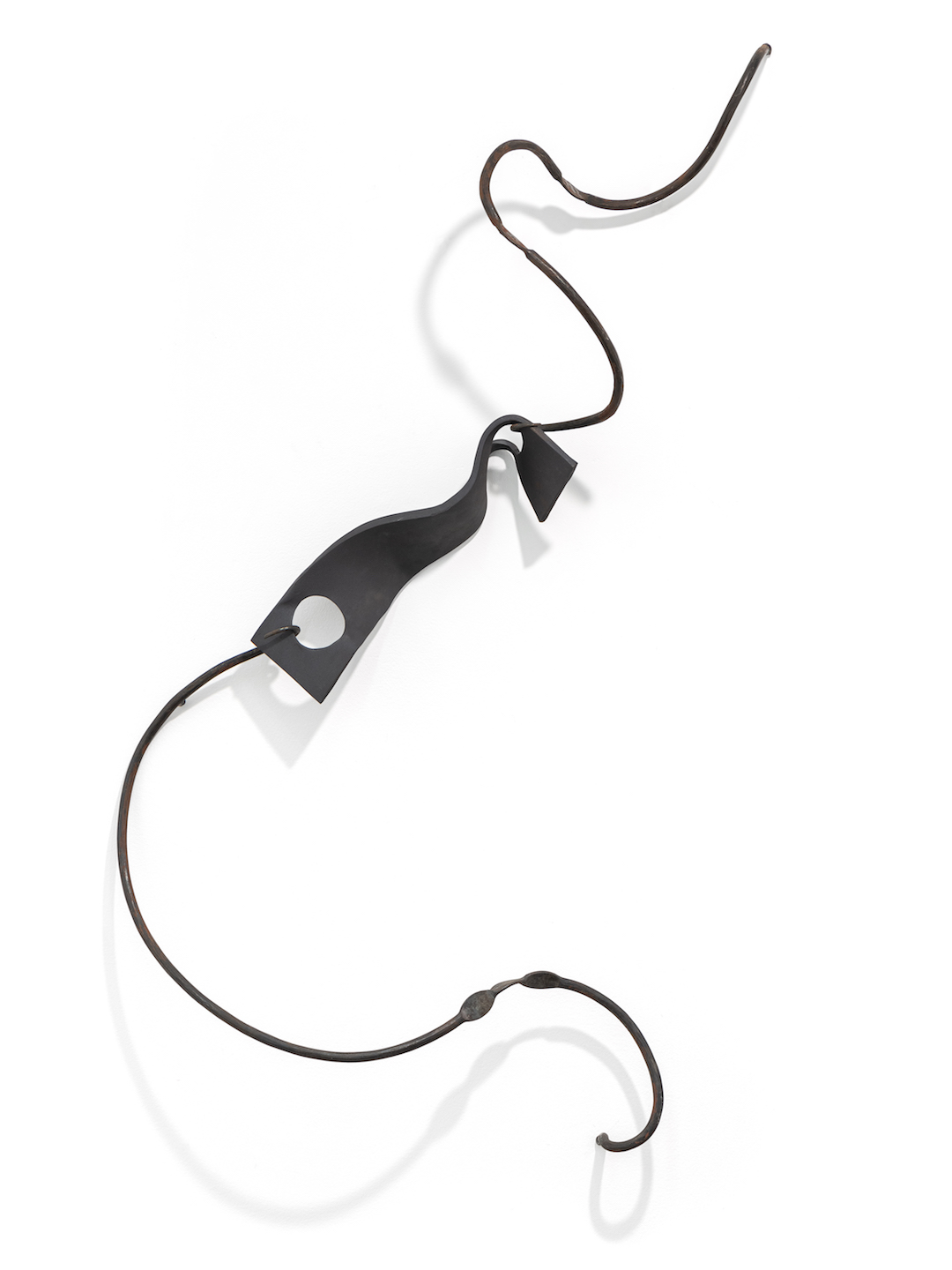 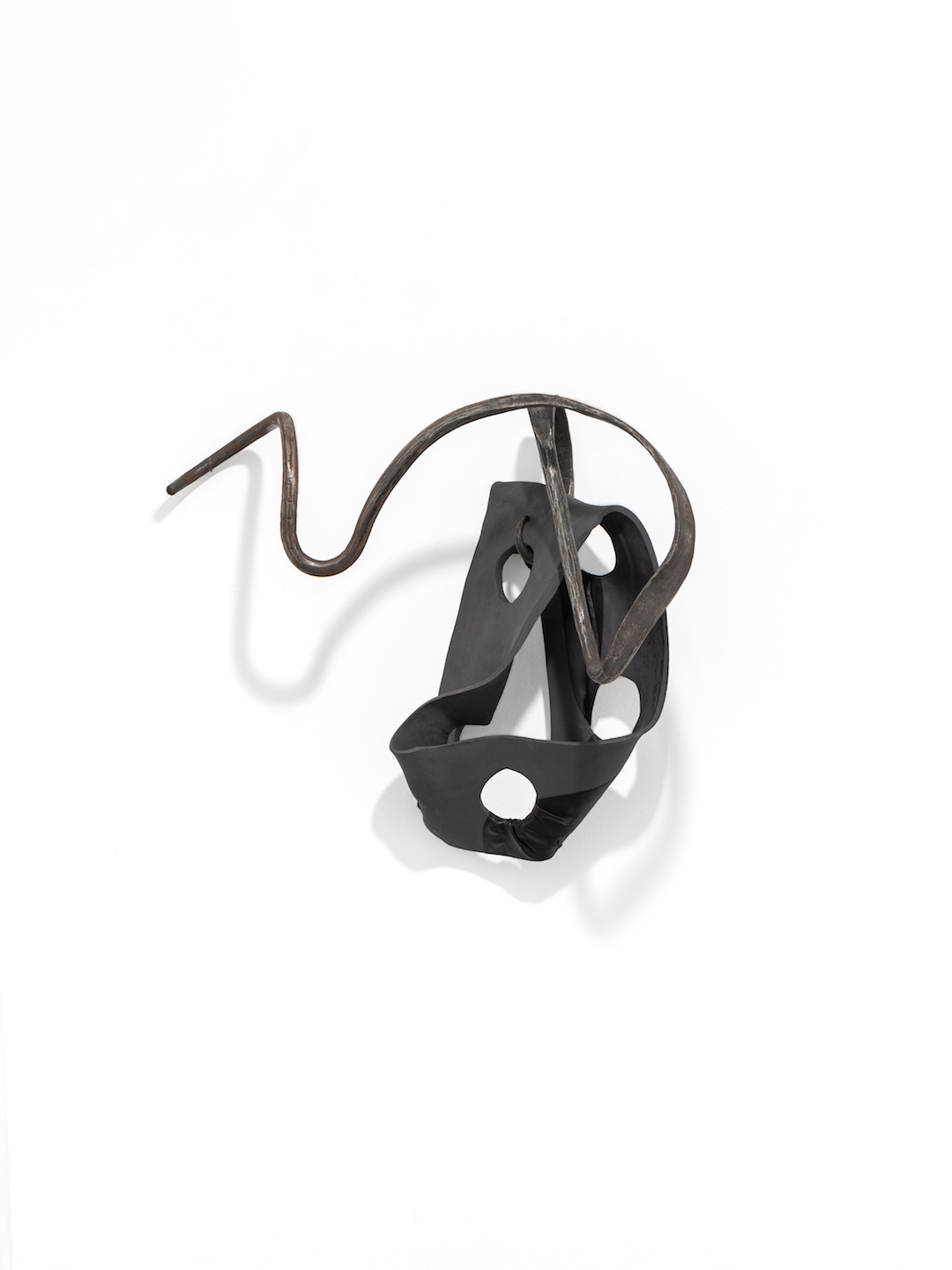