For this new edition of Loop Barcelona, Galerie Eric Mouchet is really pleased to present for the first time in Spain the immersive film Dunking Island (2022) by Capucine Vever, recently shown at the Centre d’art Image/Imatge (Orthez, France) and Galerie Eric Mouchet (Paris, France). Dunking Island is a film that projects the public into the heart of a drift in the North Atlantic, on the outskirts of Gorée Island in the Bay of Dakar, Senegal. The point of view is that of the ocean which rises and erodes millimetre after millimetre the island, a memory of the slave trade. From the surface to the seabed, past and present intermingle and merge in the slow and uncertain movement of an ecological and political fable.

The ocean is the central character here, its movements, its backwash, its traffic, its voice and its memory accompany us in its dizzying and highly metaphorical immensity. Through his words and voice, the singer-composer Wasis Diop breathes the Lebou cosmogony into the film, while Valentin Ferré, a sound artist, extends the dreams through a play of layers and ambience that touches us with an emotional climate. The oceanic space is approached here in the light of the history of the slave trade and contemporary environmental problems that escape the time of the gaze. By playing with the poetry of burial and the loss of reference points, Dunking Island seeks a plasticity in what is not visible.

Dunking Island, accompanied by Futur Anterieur Production, has received the support of the Communauté d’Agglomération Grand Paris Sud, the city of Évry-Courcouronnes, the city of Dakar, the Galerie Eric Mouchet, the Institut Français, the CNC, the Fondation des Artistes, the Image/Imatge art centre, the Kër Thiossane art centre in Dakar, and the Bel Ordinaire, in Pau Béarn Pyrénnées. The following collaborated in the creation of the installation: the singer and composer Wasis Diop, the sound artist Valentin Ferré, the artist-programmer Pierre-Yves Fave and the underwater director Léo Leibovici. Dunking Island was awarded the Michel Nessim Boukris Prize 2021 by the Fondation des Artistes and was nominated for the COAL Prize 2022. 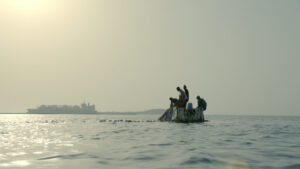